BRECKENRIDGE — Under the snow and lights of Tiger Stadium on Tuesday, Summit and Steamboat Springs High School battled in an instant classic — complete with two overtimes, five lead changes and nine goals.

In the end, Summit came out on the wrong side of an excruciating 5-4 loss on senior night. The good news for the Tigers (5-8-1) is, with their playoff hopes in the balance, they’ll have one final home game Wednesday versus Rifle. 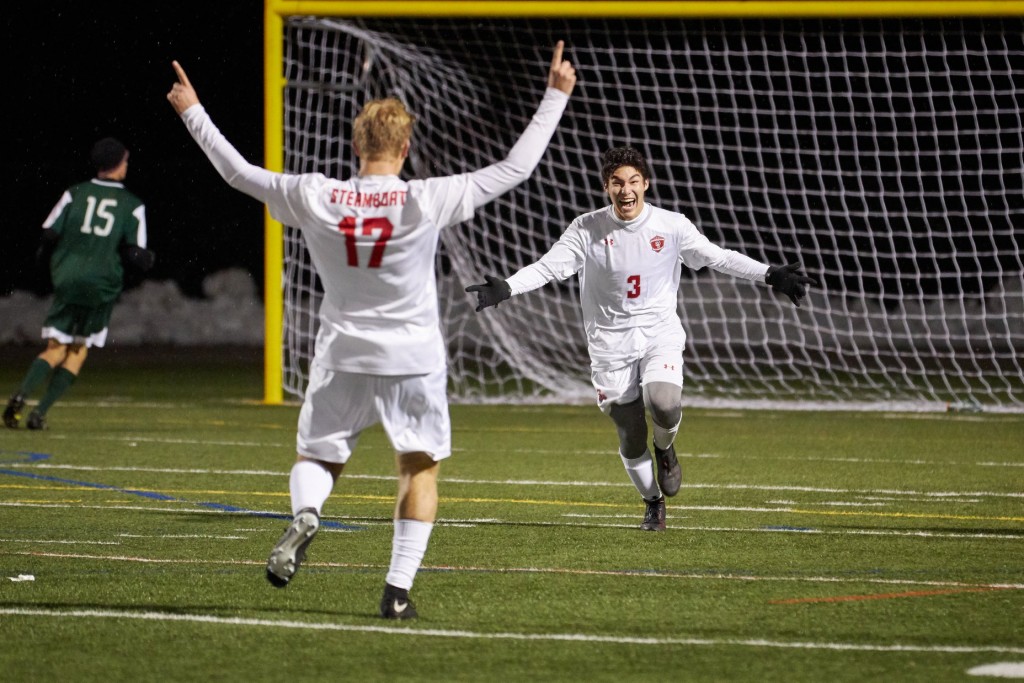 Before the Tigers take on the Bears Wednesday, Summit will look to recover from Tuesday’s loss. Entering the night ranked 29th in the RPI rankings, Summit was within the top 32 teams in position to qualify for the 4A state playoff tournament. Summit last qualified for the state playoff in 2014.

“Tonight was senior night. Our boys played hard, and we got beat — simple as that,” Summit head coach Tommy Gogolen said. “Obviously, weather wasn’t the best, but it wasn’t the best for both teams. I am proud of our effort. We battled. It just didn’t go our way.”

The Sailors (5-11) seized control of the game early before Summit’s freshman midfielder Owen Gallo scored about halfway through the first half. On the play, Steamboat’s goalkeeper saved Gallo’s first attempt before the freshman creatively put a rebound attempt through the back of the net.

Just a few minutes later, Summit took its first lead of the game on a header by center forward Maschelle Kepple. Steamboat responded with an equalizer off the left foot of Marat Washburn fewer than five minutes into the second half as snow begin to fall at Tiger Stadium. Then just two minutes later, the Tigers lost possession at the top of their own 18 before Steamboat rocketed a goal past Summit keeper Chris Orozco for a 3-2 Sailor lead.

Summit maintained aggression while down in the next five minutes, before a shot by Andrew Martin deflected off the leg of a Steamboat player and into net to tie the game, again, at 3-3. The action remained tight over the next 10 minutes before Steamboat nearly found the go-ahead goal with just over 20 minutes left in regulation. But on a Steamboat shot attempt in the box, Orozco made a charge off his line and saved the attempt with his face. The play proved costly for Summit, however, as Orozco injured his leg on the play.

Orozco gutted through the injury for the remainder of regulation. Then, with 13:41 left in regulation, Summit freshman Fabien Cuevas found a ball from Gallo that had made it behind and past Steamboat’s back line. After a save by the Steamboat keeper, Cuevas punched in the rebound attempt for a 4-3 lead.

As the snowfall became heavier, Steamboat found another equalizer with about five minute left in the game to send it to overtime at 4-4. Without Orozco in the overtime sessions, Summit reserve keeper Jesus Alvaredo made a couple of clutch saves. Summit defender Ethan Casillas then sprinted for a kick-save on the Tiger goal line to prevent a goal that had gotten past Alvaredo. But with six minutes remaining in the second overtime, Steamboat’s Daniel Lopez got behind Summit’s back line and scored the game-winner.

Summit will have fewer than 24 hours turnaround before Wednesday’s contest at Tiger Stadium versus Rifle (8-5) before wrapping up their regular season on the road on Saturday at Rifle.

“This will sting a little bit, but it’s a quick turnaround for tomorrow,” Gogolen said. “It’s just another opportunity. Usually, Senior Night is our last home game, and in this year’s case, we had a makeup game come in, which makes our last game almost another senior night.”

Original article by Antonio Olivero of the Daily Summit appeared on SteamboatPilot.com.