STEAMBOAT SPRINGS — The Steamboat Springs High School soccer team has struggled with offense all year. Over eight games, the Sailors have scored 13 goals and given up 29. 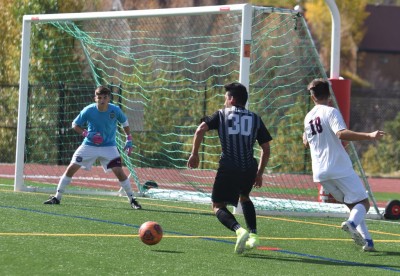 On Saturday, Oct. 5, the Sailors nearly doubled their offense on the year, netting 10 goals in a 10-6 win over Palisade from Gardner Field.

“We had a different formation, more of an attacking formation,” Steamboat Springs junior Jack Quinn-Clynes said. “We had four in the midfield and two up top, where usually we have a couple holding midfield. That definitely helped.”

Seniors Daniel Lopez added a hat trick and Oliver Caparrelli scored four times, with Caparrelli breaking through first. As the clock hit 32:22, Caparrelli used a wide-angled kick from the keeper’s left to sneak in front of the post and put the Sailors on the board.

Lopez got his first of the game 10 minutes later, beating the Bulldog goalkeeper Tyler Feuerborn with a shot in the air. Five minutes later, he and Caparrelli decided to team up to take on Feuerborn together. Lopez approached from the goalie’s right, posing as a distraction. While the Bulldogs keeper was caught up with him, he didn’t notice Caparrelli waiting near the opposite post to push in a lightning fast pass from Lopez.

Caparrelli completed his hat trick three minutes later with a chip into the net in front. Lopez tapped in another one moments after that, putting the Sailors up 5-0. Lopez spent the beginning of the season on the sidelines, but in his second game back, he made a massive impact in the team’s offense.

“You know, I don’t know exactly. I think they just have a connection,” Steamboat Springs soccer assistant coach John Cardillo said of the relationship between Caparrelli and Lopez. “It was obvious they were connecting out there.”

With frustrations flaring, Feuerborn yelled to his team in front of him, “The angrier we are, the worse we play.”

Keeping themselves in check while digging deep to get the goose egg off the board, Palisade sophomore Trustyn Miller and junior Chase Blomquist worked the ball forward towards Steamboat sophomore goalie Axel Kovach.

After Kovach took a few steps towards Miller, the Bulldog crossed the ball along the 18 where a waiting Blomquist put it in net. Blomquist struck again at the 2:25 mark to bring the score to 5-2 at the half.

“For the last four or five games, we haven’t been able to be out of our own heads,” Palisade head coach Michael Orcutt said. “Today we went out on the field no matter what happened, and we just kept fighting. No matter if the score is 10-6, we didn’t let the score dictate how we’re going to respond and get the ball to the line and go play another round. You got to keep punching.”

In slightly freaky fashion, Steamboat scored at the 32:22 mark in the second half as well, but this time, it was with a touch by Lopez.

In the second half, the Palisade offense woke up, turning a potential blow out into a shootout.

Less than two minutes after the Lopez goal, Palisade senior Josh Meyers got his team within two.

Steamboat junior Henry Cardillo got a goal, but Meyers answered immediately with another. A penalty kick from Quinn-Clynes and a fourth score from Caparrelli stretched the Sailors advantage to 9-4. It was his first goal of the season.

“I have not had a goal yet this year so I definitely wanted to take it,” he said. “My legs got swiped and the second it happened, I knew I was in the box.”

Quinn-Clynes said he looked left a little, but he aimed right. The goalie dove the right way, but the kick squeezed under him.

Two more Palisade goals brought the Bulldogs total to six goals on the day, keeping the Sailors from really running away with it. Senior Kevin Kaster made sure Steamboat had the last word, though, with a slick score with less than two minutes to play.

“I think the guys were smart about staying onside and timing the runs,” Cardillo said. “We had a lot of opportunities where we were just in on goal 1 v. 1. Palisade plays a flat back four, so they play up high. As long as you stay onside, we got some guys that are quick up top and our finishing touch was good today.”