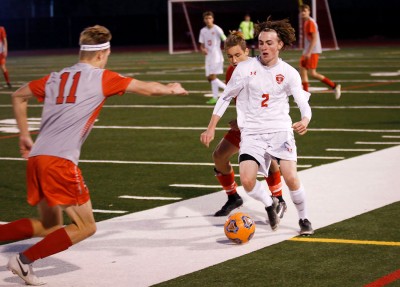 In 2018, Summit was the peak the Steamboat Springs High School boys soccer team could not crest.

The Sailors and Tigers tied 3-3 twice last year, the second matchup stretching into double overtime before it was called.

This year, Steamboat wants to close out the tight contests and turn almost-wins into decisive victories.

“I feel like we had a couple close games that could have gone either way,” Steamboat senior Kevin Kaster said. “I feel like this year we’re trying to find how we can finish those games and have them come our way.”

In 2018, Steamboat went 9-5-2 overall, 7-3-2 against Western Slope opponents, which propelled them to a playoff spot. In controversial fashion, the Sailors traveled to Durango where they fell 4-2.

“It’s no different. We’ve been doing this long enough,” Rob Bohlmann said. “You have players that graduate and new players that move up. It’s a process. Some years are different than others, but it’s a function of time.”

Senior Oliver Caparelli, who will contribute to the attack while positioned at outside back, was inspired by Moore and hopes to carry forward the momentum he created.

“I think he definitely helped our team by moving here last year,” Caparelli said, speaking of Moore. “He helped us a lot in those (close) games. I feel like we can definitely take what he was doing and apply it to what we’re trying to do this year.”

Senior Marat Washburn is expected to be one of the top producers this fall. He hasn’t played soccer in a few years, but during preseason, he showed promise on the attack. Daniel Lopez, when he joins the team midway through the season, will also be a goal scorer.

“He’s produced for us in the past couple years and that will help build momentum when we reach the halfway point,” Bohlmann said.

Bohlmann also expects senior Jevon Hovey to step up on the offensive end, along with some other underclassmen who could make an impact.

Peak offense and defense performances rely on cohesive pairings of players, which Bohlmann said may take a few matches to hash out.

“Early in the season, starting with this weekend, we’re able to get a lot of different looks from a lot of different players,” Bohlmann said. “From there, you’re able to really start putting together partnerships and groups and teams that not only speak the same language but speak it really fluently.”

In the past, Kaster and Sam Brown have played endless minutes side by side at center back, but in order to spread out the talent, Bohlmann may split them up.

“I like Sam being in the back with me. I just feel more comfortable,” Kaster said. “But if the coaches find he’s more powerful up top, then I like that. That just means someone else will have to step up in the back.”

Like Lopez, returning senior goaltender Juan Campoverde will join the team halfway through the season. Until then, sophomore Axel Kovach will spend most of the time in net. He played some games last season when Campoverde was nursing an injury.

“His urgency to mature was imminent, so he had that experience,” Bohlmann said of Kovach.

With that in mind, Kovach will likely be the netminder when the season opens at home against Rifle at 11 a.m. Saturday, Aug. 31.

The ultimate opponent, though, is Battle Mountain. The teams have a long, combative history that resulted in the Huskies downing the Sailors twice by a combined score of 10-3 last fall. On Sept. 24, Steamboat will travel to Battle Mountain, and on Oct. 24, the Sailors will host the Tigers to close out the regular season.

“Every opponent is important, but Battle Mountain and Steamboat have a lot of history. They have really been the class of our league for a bit,” Bohlmann said. “They’ll be the team that everybody’s chasing.”