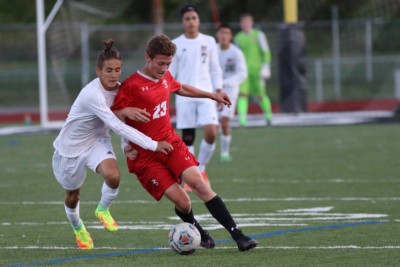 SUM — It’s a little early for trick-or-treating, but Steamboat Springs soccer has two haunted houses in its collective rear-view mirror.

On Tuesday, the Sailors came away with a 2-1 victory against Eagle Valley in Gypsum, where they had not won in three years. Steamboat moved to 3-0 in the 4A Slope, a record that also includes a win at Glenwood Springs, another place where the Sailors usually get a trick instead of a treat.

“It’s been a big thing that we have addressed, doing what it takes to win on the road,” Sailors coach Rob Bohlmann said. “It seems like an eternity since we’ve won on this field. It was a tale of two halves, but they got the job done.”

And left unsaid is that Steamboat just beat Eagle Valley which beat Battle Mountain last week. Of course, such transitivity and $5 will buy you a fancy cup of coffee. 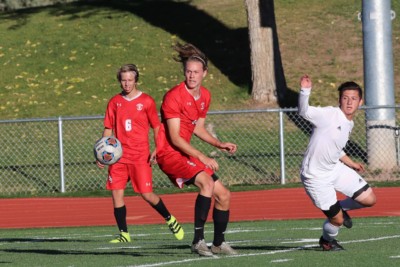 The Sailors (4-1 overall) played a strong game in the first half, moving the ball as wide as they could at John Ramunno Field, a thin pitch, switching the field well and keeping their composure even though the goal didn’t come early.

Not surprisingly, Cruz Archuleta capitalized on a free kick in the 38th from outside the box to the left side of the Devils goal. That was a shot that sophomore Eagle Valley keeper Lalo Balderas would probably like to have back, and his teammates were quick to console him after the game.

However it came, Archuleta’s goal was indicative of the play in the first 40 minutes, though McCawley had to come up big just after that marker went on the board.

The Sailors seemingly had iced this game when Quinn Connell headed in a throw-in from teammate Layne Salyer for a 2-0 lead in the second half.

“Two mistakes cost us. If we want to play at the top of the league, those details make the difference,” Devils coach Bratzo Horruitiner said. “We need to shave the edges.”

But as visitors know well, getting out of Gypsum with an easy win just doesn’t happen. Eagle Valley’s Leo Rosales made a brilliant back-post run and got the great pass from Juan Garduno with 10 minutes left to make it 2-1. The Devils (2-2 overall and 2-1) in the Slope had new life.

Bohlmann credited Alex Coffey, Will Beurskens and McCawley with “staying connected but not losing (their) composure and tenacity.” 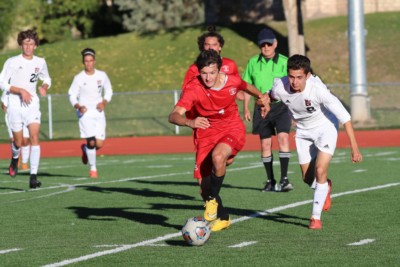 If anything is predictable in a Slope soccer race, it’s the unpredictable. There’s a lot of soccer to go. Eagle Valley hosts Holy Family, out of the Tri-Valley League, on Saturday, while Steamboat gets some rest before heading to Rifle on Sept. 15

“We’ve had like four games in a week,” McCawley said. “This coming week’s going to be a nice time to go back and work on ourselves for the rest of the season.”