Sailors Show All Heart in Second Round of Playoffs 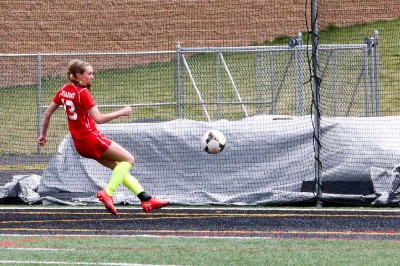 Did you expect anything less?

In the first state-playoff meeting between the longtime rivals — be it fall or spring — Battle Mountain girls soccer outlasted Steamboat Springs, 3-2, on a Logan Nash golden goal with 7:08 left in the second overtime of their second-round game on Saturday in Edwards.

The Huskies took a 2-0 lead in the first half, and had the Sailors reeling. Steamboat rallied in the second half with two of its own and Battle Mountain was on its heels. Were it not for Nash, these two teams might still be playing.

And as trite as it is, the cliché remains true — no one deserved to lose this game.

“It was all them. At halftime, it was regrouping,” Steamboat coach Rob Bohlmann said. “They came off and they were devastated. The did an awesome job of resetting themselves and coming out and showing what this team’s DNA is all about. It’s grit and fight and playing to the final whistle.”

The good news also for Steamboat fans is that Sailors goalie Ocoee Wilson is junior. She was simply outstanding on Saturday. Were it not for her, this game wouldn’t have come close to overtime.

Bohlmann described his goalie as, “magic.” The Copes of Battle Mountain didn’t disagree.

“We take our hats off to her,” said Dad, aka David the Huskies head coach.

Battle Mountain looked like it was in control early with Nash scoring from outside-back Mallory Skidmore in the seventh minute. That was a particularly good moment for the Huskies as in their first meeting of the season the Sailors put pressure on Battle Mountain’s outside backs, a tactic which stalled the Huskies’ powerful attack.

With six minutes left in the half, the Huskies were able to bump the lead to 2-0 as Ortiz fed Morgan Croke.

“We sort of knew at 2-0 that it wasn’t job done,” coach David Cope said. “That’s a good lesson we learned through our first playoff game. And that’s what you do. You grow through these playoffs. I thought we did a good job staying connected to the game. We created a ton of chances. You can’t fault the way we played. They just didn’t go in. They didn’t go in because of a spectacular goalkeeping display by Ocoee Wilson.”

On Saturday, the Huskies didn’t play poorly. The Sailors simply found a resolve within and came back.

In the 60th minute, Mackenzie Gansmann scored the first of her two on a helper from Brooke Buchanan.

Natalie Bohlmann assisted Gansmann on her second goal four minutes later and the Sailors had all the momentum.

With 30 minutes of overtime in the playoffs looming, both teams tried to regroup during the five minutes after regulation. Despite a chilly afternoon, the Sailors and Huskies were gulping water to avoid muscle cramps.

Nash was clearly hurting with both cramps and shin splints, and she soldiered on. She crushed a shot, which hit the crossbar in the first overtime session.

The decisive sequence came when Ortiz laid it back to Molly Phannenstiel, who sent it forward Nash on the left side. Nash sent in a lofted shot over Ocoee, finding the back of the net, sending the Huskies to quarterfinals and the Sailors home for the season.

While the Huskies went nuts, the Sailors were understandably devastated, having left everything out on the field.

“The only thing you can say is how much you appreciate and how grateful you are for everything they’ve done this season,” Bohlmann said. “They definitely made the Western Slope proud, and certainly all the best to Battle Mountain as they continue their run.”

Posted by Steamboat Springs High School Soccer on Sunday, May 10, 2015