Sailors Season Comes to an End In First Round of Playoffs 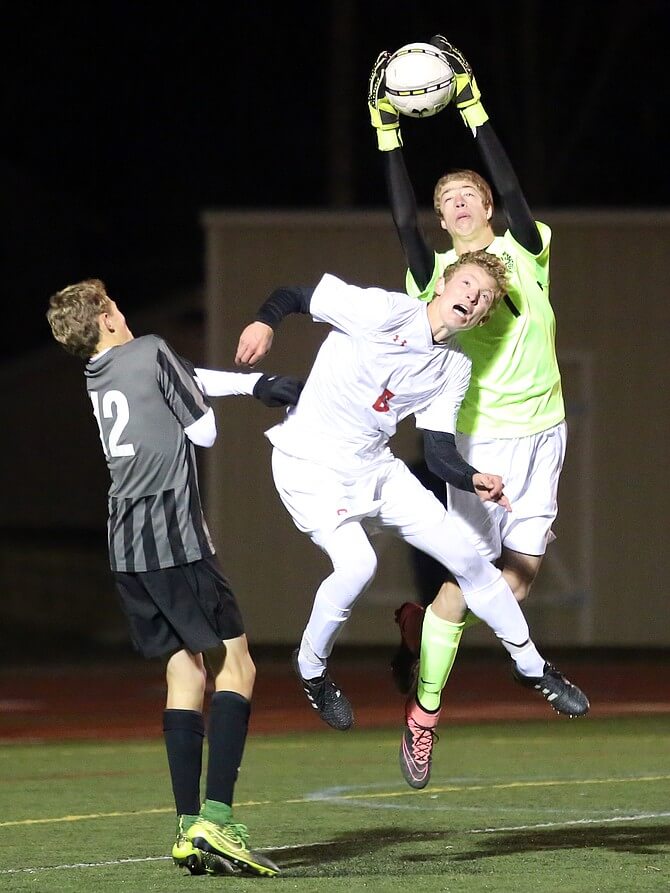 Photo by Austin Colbert
D’Evelyn goalkeeper Dylan Wickersheim snags the ball out of the air, fending off a scoring attempt from Steamboat Springs senior Charlie Beurskens in the second half of Wednesday’s game at Gardner Field. SSHS’s season ended with a 3-2 loss in the first round of the 4A playoffs.

With a minute to play and the game tied, the Sailors were lining up for a free kick. Then, with only 17 seconds to go in regulation, D’Evelyn senior Giovanni Franzese put the ball in the back of the net to give the Jaguars a 3-2 win Wednesday at Gardner Field in the first round of the Class 4A state playoffs.

“It’s a fine line. We were right there with them,” SSHS coach Rob Bohlmann said. “When you push numbers and you take chances, they are going to look to counter. And we tracked them well to counter. They were able to do just enough to find that goal.”

Steamboat, the tournament’s No. 16 seed, was hosting its first playoff game since 2009, when it lost to this same D’Evelyn team 1-0 on an own goal. The two teams met in the first round last year as well, D’Evelyn winning 4-1 in Denver.

Early in Wednesday’s game, it looked as if the Sailors were finally headed for victory against the Jaguars.

“It was a great start. Good ball movement,” Bohlmann said. “A lot of things that have been successful for us all season. The start was tremendous, and D’Evelyn did a nice job to reel the game back in.”

The Sailors led 2-0 midway through the first half, getting a goal from senior Jack Salyer in the 11th minute and another from junior Cruz Archuleta in the 23rd minute. But a goal by D’Evelyn’s Daniel Bernard in the 32nd minute cut SSHS’s halftime lead to 2-1 and started the Jaguars’ rally.

The Jaguars tied the game in the 55th minute when team captain Wesley Tedstrom outran Sailor goalie Andrew McCawley to the ball and was left with an unattested shot. Each team had its share of chances to finish the game during the next 20-plus minutes, but it took a late lineup change from D’Evelyn to make it happen.

“We are a pretty efficient team at counter-attacking, because we’ve got pretty good speed, especially up front,” Moline said. “Josh, he gave us a few minutes at the end because we needed some more speed up top. He was able to chase and win a ball down. Jack (Draeb) got it, turned the corner, crossed and Gio was there. Just like we trained.”

For the Sailors, 12-4, it was a brutal way to finish what was otherwise a remarkable season.

“The guys put in a great effort. They played very well. And it didn’t go our way tonight,” Bohlmann said. “The pain is going to be there, but it’s going to go away quickly. You will have a lot of victories as you move on in life. There was so much success in the season, so much growth. It was such a professional group, and this is a season we are all going to remember for a long time.”