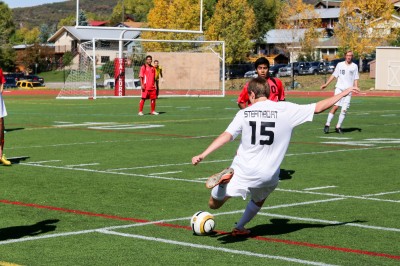 The Sailors start quickly with a goal by Jack Salyer in the 58th second and he never let off the gas. When all was said and done Steamboat Springs High School boys soccer team had scored 7 times to send Glenwood Springs High School home with a tough loss. Salyer ended the game with 3 goals and 1 assist with other goals by Charlie Beurskens(2), Devin De Jong and Cruz Archuleta and made the Sailors’ Homecoming game a joyous one.

The Sailors will take on league leading Summit High School in Summit on Tuesday night. The last meeting between the two teams ended in a 2-2 tie.