Edwards — Before the fans arrived, before the players warmed up and well before anyone popped confetti, Steamboat Springs High School girls soccer coach Rob Bohlmann took his team to the middle of the soccer field next to Battle Mountain High School.

Hours before one of the biggest games of the Sailors’ season, he talked to the girls about their journey.

For a group of seniors who had never beaten Battle Mountain before this season, that field had served as a major milestone on the journey. One year ago, the Huskies beat the Sailors in overtime on that field in the second round of the state playoffs, ending their season and maintaining a firm grip on the rivalry between the two programs.

With a 3-0 victory, the Sailors avenged that anguish from last year, completed a season sweep of the Huskies and, most significantly, secured their first outright league championship in a decade.

Steamboat got three second-half goals to win the game and lay claim to the Western Slope League.

“This has been the big goal for a long time,” said senior goalie Ocoee Wilson, who helped Steamboat keep an opponent scoreless for the ninth time this season.

“Getting that win and having it be a 3-0 shutout was just an amazing feeling,” she said. “It gives us this courage to keep pushing on going into playoffs.”

The win keeps the Sailors, 13-1 overall, perfect in league play, with an 11-0 record. They have one game to go, senior night at 6 p.m. Thursday in Steamboat Springs against Eagle Valley, 4-7-2.

If the squad can play as well as it did in Monday’s second half — creative, aggressive and stout — the team could be on track for a perfect league run.

Steamboat wasn’t at its best in the first half against Battle. Slightly out of sorts, the team did plenty of possessing the ball but struggled to turn that into quality shots on goal.

That changed in the second half as the Sailors maintained that consistent pressure, but this time turned it into consistent shots.

The first strike came from junior Brooke Buchanan in the 49th minute. She hammered home a 1-0 lead after a give-and-go with senior Natalie Bohlmann.

Freshman Megan Salyer made it 2-0 later in the half when she arced in a corner kick for just her second goal of the season. 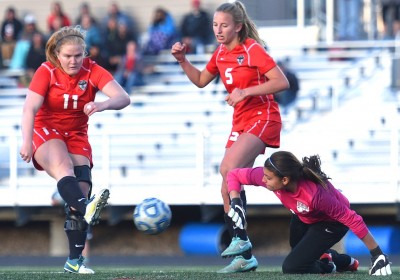 That score was a waypoint on Richey’s own journey.

She couldn’t play in that heartbreaking game last year, and in fact, she had to skip the season entirely after tearing her ACL during the last basketball game of her junior season. She knew she could come back, however, and worked to ensure it would happen.

Richey proved strong enough to play through her senior basketball season then on the pitch has been one of the many savvy veterans who make up the team’s backbone.

When time expired Monday, Richey and the rest of those players rushed the field. They jumped and laughed and cheered, and several accompanying fans popped confetti cannons.

It was a night they won’t soon forget and a part of their journey.

“You just have those times that develop the character, just those things that really take you deeper as a team and as a player, and I think that’s really defining of this group,” Rob Bohlmann said, considering last year’s defeat in Battle Mountain and Monday’s triumph. “That helped develop the hard work and the grit they have, and that’s a huge part of this group’s DNA.”