Sailors hope to play like Ann Barney on Tuesday 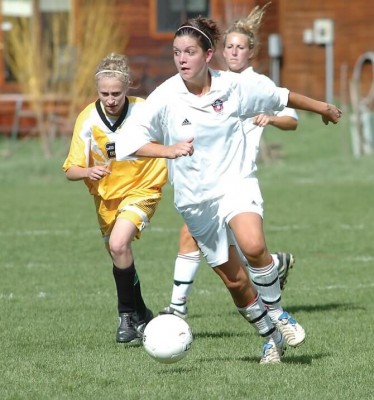 Ann Barney controls the ball during a May 4, 2006, game against Delta.

Barney was a product of the Steamboat Youth Soccer Association and played for the high school program through her graduation in 2006.1

“She gave it her all,” Bohlmann said. “She had up days and down days, like anyone, but she was just a fantastic person.”

Barney died in a 2008 car crash and ever since, the soccer program has honored her memory. She wore No. 9, and the team hasn’t assigned that number since.

Instead, the current players vote after every game on who gets to wear No. 9 at the next game.

“It could be the leading scorer or it could not,” Bohlmann said. “It’s a person who carried the team that day, in a game or over the weekend.

“Ann had such a presence and positive life force with everything she did, so we play to keep Ann alive.”

The Sailors improved to 4-0 on the season with a 5-1 win on Saturday at Delta, getting goals from five different players. Natalie Bohlmann, Mackenzie Gansmann, Jordi Floyd, Brooke Buchanan and Keelan Vargas all scored for the team.

It was a strong enough performance, Rob Bohlmann said, that no player earned the No. 9, so as the team heads into one of its biggest game of the season, at 4 p.m. Tuesday at home against Battle Mountain, he’s looking for the whole team to honor the Barney tradition.

“That means we’re going to work extremely hard for each other to continue the momentum,” he said.

It’ll take extremely hard work for the team to win against Battle Mountain, a fierce rival who’s inflicted plenty of pain on the Sailors in recent seasons.

The Huskies have won six consecutive games between the two, including three last year. Two of those were overtime wins, including one in Steamboat early in the season and another, 3-2, in the state playoffs, that ended the Sailors season.

It’s going to take a special performance to pull out the win, Bohlmann said, and that’s what he’s hoping his team has on tap.

“It’s just amazing what’s happening within the group and how they play for each other,” he said. “Tuesday, it’s going to be an Ann Barney day.”