Sailors hope to emerge from 2016 shadows 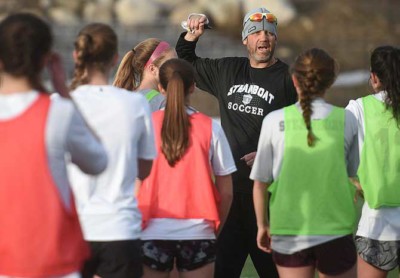 There is, however, an expectation the team will again be in the hunt.

A season after what was the best season in a decade, now without many of the feet that made that feat possible, the Sailors don’t expect much drop-off, even if they also don’t anticipate quite the same level of success.

“It’s something we always aspire to every year,” Bohlmann said. “We feel like, consistently, we can be in a position where we can be challenging for a league title. This year will be no different.”

The Sailors kick off their season at 11 a.m. Saturday with a trip to play at Western Slope foe Glenwood Springs.

The success of the 2016 team will cast a long shadow, especially early in the season.

That squad lost only once during the regular season, and that came in overtime. It went undefeated through the Western Slope and charged to the state quarterfinals. It was one of the best teams in the state, defensively, allowing only seven regular-season goals, and it was plenty potent on offense.

It graduated much of that talent, including the goalkeeper, who headlined that defense, and five of the team’s top six goal scorers.

“The only constant is change,” Bohlmann said. “We had a group that had been very instrumental in the varsity team for a couple of years, but it’s a constant change. Still, the standards are the same. Now, the culture we strive to attain is still the same, and our core values are still the same.”

The top returning player when it comes to scoring is Delaney Moon, now a sophomore. She had nine goals and five assists a year ago.

As for goalkeeper, Bohlmann said he has seven athletes currently seeing time there, pushing each other and fighting for starts.

There are plenty of experienced seniors, juniors, and sophomores who’ve waited for their chance, plus a huge class of freshman, with athletes who could immediately get in the varsity mix.

They have plenty of big games to look forward to.

The squad will play rival Battle Mountain in Steamboat March 21, then move on to another exciting home game April 8 against Lewis-Palmer, the defending state champs and the team that ended Steamboat’s playoff run a year ago.

Will this squad have enough to compete in those games, to challenge again for the Western Slope? Time will tell, but Bohlmann said his expectations aren’t much different this spring than they were last.

“The legacy that group left, it’s something they built upon that previous groups had left,’ Bohlmann said. “This group will build on that legacy, too.”