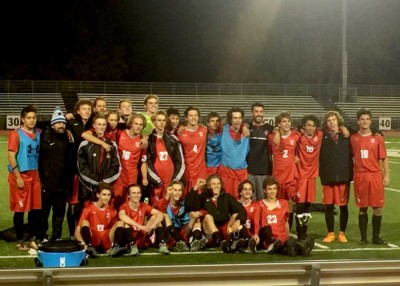 Being an athlete from the mountains of Colorado can be challenging. When your closest league away game is more than a 90-minute drive on big yellow school bus, with some trips logging more than 400 miles down and back in a day, just to get in a game. When the playoffs come around, the players at Steamboat Springs High School know, that they are headed to the front range of Colorado, and they wouldn’t want it any other way. The players want the opportunity to show teams from the big cities that these mountain kids really can play, and they are going to give you a run for your money.

On Wednesday night, the Sailor Men’s soccer team took on another one of those trips, venturing through mountain passes on a 4 hour journey to Longmont to take on the Silver Creek High School Raptors. The Sailors came into the game ranked 25th, ready to take on the #8 Raptors. The Steamboat players were ready for battle out of the gate and an early foul in the first minute gave the Sailors their first crack at scoring but it was not meant to be. Just 5 minutes later, Silver Creek Captain Stewart Lemmon was able to find the back of the net past Steamboat goalkeeper Andrew McCawley to put the Raptors up 1 – 0.

Five minutes later, Steamboat speedster Ross VanHara found himself streaking down the left sideline with the ball, after finding his target in the box, he crossed in a ball that was batted down by a Silver Creek defender. The handball resulted in a Penalty Kick from the spot, that VanHara was able to put home to knot the game at 1-1.  The battle was on.

The Steamboat defense was proving to be on point, on this night lead by Mac Dumke, who throughout the night, would provide numerous tackles, keeping the ball safely out of the 18. The game was a physical match, highlighted by early yellow cards for Quinn Connell and Cruz Archuleta for aggressive play in the first 20 minutes.

In the 23rd minute, Murphy Bohlmann had two key opportunities for the Sailors barely keep out of the net after some heroic saves by Silver Creek’s goalkeeper Aidan Lantaff.  The first half strikes on goal seemed to be leaning the way of the Sailors, who had numerous opportunities but were just not able to find the goal frame. The teams headed to halftime tied up at 1-1.

The second half started off quick for the Raptors. Top regular season scorer Conner Peskin was the fortunate recipient of a mis-cleared ball by MacCawley in the 3rd minute, outside the 18. The clearance hit Peskin in the chest and he was able to direct the ball pass MacCawley and finish on the open net to make the game 2-1 in favor of the Raptors.

The tough battle continued with Peskin receiving a yellow card in the 51st minute after a reckless tackle. Just 5 minutes later, in the Silver Creek box, Will McConnell was able to get behind the defensive line, but the Silver Creek goalkeeper pulled down McConnell and drew a penalty kick, the second of the night for the Sailors. Raptor’s Tanner Ambrose and Coach Rob Johnson were none to happy with the call and both were shown a yellow card for decent.  Will Beurskens stepped up to take the kick and was able to put it home to bring the game back to even, now 2-2.

Two minutes later the Sailors were delt a heavy blow. Previously yellow carded Connell prevented a quick kick off of a restart by the Raptors near midfield.  According to Law 13, this is a cautionable offense, and Connell was shown his second yellow of the game and sent off with the red, leaving the Sailors to play the remainder of the game with 1o men. The tough battles continued on the field with one more yellow card handed out to Simon Gerlach for the Raptors in the final 10 minutes of the half.

Those 10 minutes saw a flurry of shots from Silver Creek, but none were able to find the back of the net, to the dismay of the home crowd. With both teams already physically exhausted, the teams found themselves headed to Overtime, two 15 minute periods that would see numerous opportunities for both teams but nothing finding the back of the net. After 110 minutes of play, the teams still could not find a winner and the game would fall to the cruel world of Penalty Kick Shootout.

The first two rounds of the shootout allowed both teams to score of the feet of Beurskens, Miguel Toledo, VanHara, and Peskin. In round three, Steamboat’s leading scorer Archuleta stepped up and put the ball to his left, only to have Lantaff save the shot. The save would prove to be the difference maker, with Lemmon, Lane Sayler, Miguel Rico, Will McConnell and Ambrose all converting on their kicks to end the game at 5-4 in favor of the home team Silver Creek Raptors.