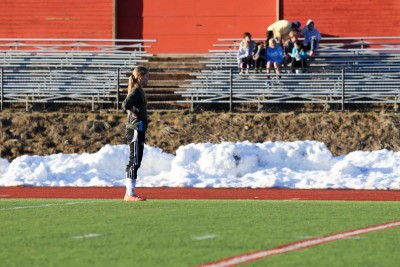 Junior Ocoee Wilson surveys the field before later entering the game as a striker and scoring the game winning goal.

It was a game that if you had not been watching the scoreboard might have seemed like the Sailors had complete control, but for much of the second half of the game the Sailors were actually trailing. First half goal by Junior Natalie Bohlmann had been answer back by Summit high school’s Freshman Tanner McCann in short order. The Sailors seemed to control the tempo and the ball for most of the game, but finding the goal seemed elusive.

In the second half, McCann struck again, with a looping goal that seemed more like a cross than a shot and found its way just into the left side netting of Ocoee Wilson’s goal. It was no time to hit the panic button and the Sailors went back to playing their tempo. Mackenzie Gansmann found numerous occasions to speak down the sidelines and slot balls through the box, but the Sailors were just unable to penetrate the Summit Defense in the box. With under 10 minutes left, Gansmann found her self with the ball behind the defense and was able to tie the game with a break away goal. Wilson, now playing up top as a striker, tried to work through the tight defense of Summit, but by the end of regulation the game was still tied at 2.

Overtime however would not be a long drawn out 20 minutes. Just two minutes into overtime, with the Sailors attacking, an apparent hand ball inside the penalty box proved to be the undoing of Summit on this night. With the backing of her teammate, Wilson stepped up and struck home a goal to the left of Summit’s goalkeeper, giving the Sailors at Golden Goal league win.

The Sailors now sit 2-0 on the season with their next game Thursday night at home against the Eagle Valley Devils at 6pm.