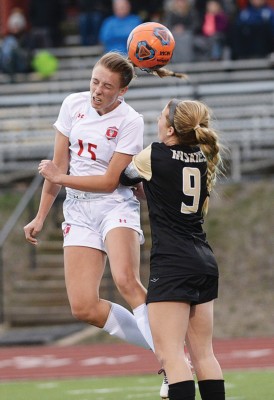 Steamboat Springs soccer player Delaney Moon heads a ball in the first half of Tuesday’s soccer game against the Battle Mountain Huskies. Moon scored both the Sailors goals in the 2-1 game, as Steamboat netted the game-winning goal a little more than a minute into overtime. Photo By John Russell

It took overtime, but the Steamboat Springs High School girls soccer team finally got into the win column Tuesday at Gardner Field with a thrilling 2-1 victory against Battle Mountain in the team’s home opener.

The goal came a little more than a minute into overtime, when Kelly Petix was able to win the ball before a Battle Mountain player could pass it. Steamboat’s Megan Slayer recovered the ball, created some space and made a nice pass ahead to sophomore Delaney Moon, who completed the run by beating Battle Mountain goalkeeper Jordan Glendenning for the game winning goal just over one minute into the overtime period.

“We worked well as a team getting it up the field and creating space. Megan gave me a really good pass, and I kept my composure and was able to finish it,” Moon said after the game. “We just had a bunch of energy coming in, and we were really hyped for this game.”

Moon not only scored the Golden Goal, the name given to a sudden-death goal in overtime, but also had the golden foot during Tuesday’s game. Her first goal of the night gave the Sailors the lead at 22 minutes into the first half.

The rest of the half was a back-and-forth battle, but Steamboat held the lead, 1-0, at the midway point.

In the second half, however, Battle Mountain midfielder Avery Weaver got a nice through ball and pounded it past Steamboat goalkeeper Leah Rowse to tie the game at 1-1 in the 49th minute. The game would remain tied through regulation, setting up the overtime thriller, which came in the 81st minute.

“It’s always difficult to lose in overtime, and we were really proud of the effort by our team through the whole game. It’s just a shame to lose that way,” Battle Mountain coach Dave Cope said. “Despite the final score, we made another step forward tonight; all of the sudden, we are in the game.”

The victory was the Sailors’ first of the season after 2-1 loss to Glenwood in the opener and a 6-2 loss to Golden on Friday. The overtime win was a big boost for the Sailors, improving the squad’s overall record to 1-2 overall and 1-1 in league play.

Steamboat is currently tied with Eagle Valley and Summit in the standings. Battle Mountain is off to a slow start this season, and Tuesday’s loss drops the team to 0-4 overall and 0-2 in league play. The Huskies are currently in the Western Slope cellar behind Rifle, which has played one fewer game. The Huskies were disappointed with Tuesday’s loss, but not the effort.

“I’m really happy with the way we played. We are growing as a team and learning how to pay together a little more,” Weaver said. “We just are not getting the lucky ending to the games.”

Sailors head coach Rob Bohlmann is also confident with the direction the Sailors are headed.

“That’s the big picture:” Bohlmann said. “The consistency from our opening half of the opening game, to the first and second half of our second game to this. Consistent progression: That’s been the story line within our group, results aside. That’s something that’s a great habit that they have established. … Getting the win makes all that work very rewarding.”