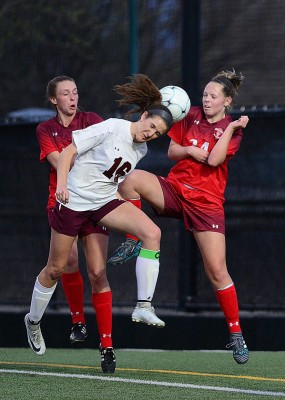 Feller, who has already signed to play soccer at the University of Denver, took a pass just past midfield, made a nice move to beat the Steamboat defender and punched the ball into the back of the net to give the hometown Bulldogs a reason to cheer and a 2-1 victory.

The Sailors took the lead midway through the first half in Tuesday’s game at Walker Field on the Colorado Mesa University Campus in Grand Junction when Lucy Wilson made a crossing pass to Rachelle Koly, who in turn fired a shot over the head of the Palisade keeper.

The Sailors would hold the lead until the 73rd minute when Palisade capitalized on a corner kick by Lexi Newton that bounced off a couple of players before it found the foot of Emerson Wilson who fired it into the game to make the score 1-1 headed into the final stretch.

The two teams went to overtime, but it ended quickly with the Feller goal.

The Sailors will not have any time to sulk over the loss as the team will host Battle Mountain at 6 p.m. Thursday at Gardner Field. The game looks to be a key one as Steamboat looks to hold it’s position in the tight 4A Western Slope Conference standings.