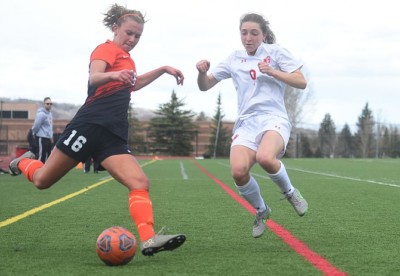 Lewis-Palmer’s Sammy Kazlausky winds up for a shot as Steamboat’s Teegan Ludwick leaps in to defend Saturday. Steamboat went on to lose the game, 6-0. Photo by Joel Reichenberger

When the Steamboat Springs and Lewis-Palmer girls high school soccer teams met a year ago, the final score was the only thing that mattered.

The Lady Rangers won that one in the state quarterfinals en route to winning the Class 4A state championship.

Saturday, Lewis-Palmer made the trip to Steamboat for a regular season rematch, and in the non-league game, Sailors coach Rob Bohlmann said the final result didn’t bear quite the same weight.

The Lady Rangers scored early and kept the pressure on, eventually winning 6-0, but Bohlmann said the game was one that can power his team as it looks ahead at the second-half of its schedule.

“We went into the game saying we were going to measure everything, with the scoreboard being the last thing we’d measure,” Bohlmann said. “We feel really good about a lot of the measurements we take away from today’s game.”

Steamboat will play at 4 p.m. Monday at home against Palisade. The Sailors are hoping a win could vault them back into the mix in the Western Slope League, where they currently have a 3-3 record. Palisade sits atop the league at 5-1.

The Sailors beat Palisade twice last year, 2-0 and 2-1, but as Lewis-Palmer confirmed again Saturday, this isn’t that Steamboat team.

The Bulldogs only league loss was a double-overtime thriller against Battle Mountain, and they’re coming off a 6-1 win Saturday against Summit.

“We have an opportunity,” Bohlmann said.

Lewis-Palmer didn’t have much trouble Saturday. The team, ranked third in Class 4A in the most recent chsaanow.com poll, racked up a 3-0 lead in the first half, then added three more goals in the second.

“They have really good composure with the ball, and they play with a lot of confidence,” Steamboat senior Meg Anderson said. “With some tough losses, it’s been hard to keep our confidence, but we’re working on that.”

She’s hopeful her team can pull that together heading into Monday’s game.

“It’s going to be a challenge,” she said. “We haven’t been playing to our potential, so each of us is trying to push each other to reach our limits. It will be a fun, exciting game.”