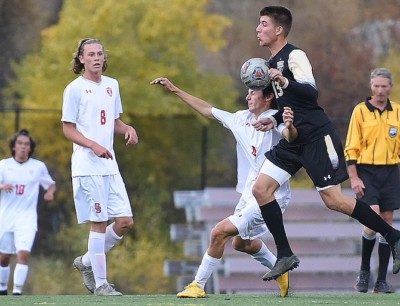 Battle Mountain’s Creek Kamby fights through Steamboat’s Will McConnell on Tuesday as the Huskies beat Steamboat, 3-0. The result drops the Sailors from the top of the league and into a three-way tie for first.

The Battle Mountain High School soccer team took advantage of its first big opportunity Tuesday, senior Miles Joersz burying the ball in the net to capitalize on a slick corner kick play midway through the first half.

Steamboat, meanwhile, missed moments later on what would be its best opportunity of the game. That set the tempo for the game, which the Huskies went on to win 3-0.

The result knocked the Sailors off its perch atop the Western Slope League, knotting Battle Mountain, Steamboat and Eagle Valley with one loss each.

Corner kicks proved particularly bountiful for Battle Mountain on Tuesday, a welcome sight for Cope, who said it’d been a weak area to that point in the season.

Joersz started Tuesday’s scoring by hammering that ball, which was played softly right through the middle of the goalie box. He blasted it home for a 1-0 lead.

He made it 2-0 later in the game when he put away a second opportunity from a penalty kick. That was all the insurance Battle would need, but Tony Velasco scored again moments later, anyway, just in case.

“It’s a designed play we have and we just executed it great,” Joersz said, considering his first goal. “This was huge for us, our biggest test. After losing to (The Classical Academy) this was our reality check to prove to ourselves we have fight.”

Steamboat’s best chance to counter Joersz came before anyone had even caught their breath from that first goal.

“That’s a game-winning save,” Battle Mountain coach Dave Cope said. “Keepers don’t get to score game winning goals, but when they get a save like that, that gave us the platform to win the game.”

Steamboat, 6-2, threatened several more times later in the game, but Battle’s two-goal flurry put the game away in the 68th minute.

“It was just an unfortunate night,” Steamboat senior Will Beurskens said.

The win extends the Husky’s winning streak against Steamboat to 10 games.

The teams meet again Oct. 20, the last game of the regular season for both.

“We always have that to look forward to,” Beurskens said. “We have so much in between we need to improve on, and I believe we can do that.”