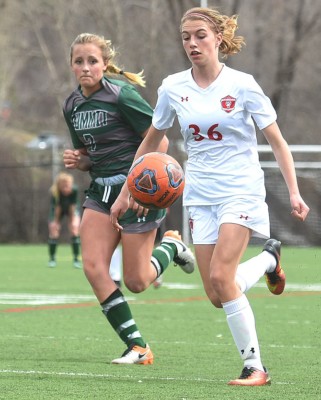 Steamboat Springs freshman Sophie Leeson keeps her eyes on the ball as she pushes it up the field Saturday against Summit. Leeson scored in the game, her first varsity goal and the only goal her team would need on the day. Photo by Joel Reichenberger

It’s not that Sophie Leeson has never scored a goal. She’s a freshman on the Steamboat Springs High School girls soccer team, sure, but she’s played plenty of games of club soccer.

Still, her eyes grew wide and her heart rate picked up after taking a pass from Keelan Vargas on Saturday as the Sailors played at home against Summit.

A lane opened up, a clean 25 yards to the goal, and she charged ahead with the ball, excited, but almost too nervous.

She gathered her composure, then rocketed the ball past the keeper’s left hand and deep into the net.

The win was the second in a row for the Sailors and more evidence the team has found its footing after an 0-2 start.

Steamboat generated more threats throughout the contest and played one of its best games of the season on defense.

“We also created a lot of opportunities. We feel great about that,” Bohlmann said. “Now, it’s about how can we be a little more efficient putting our opportunities away.”