Oh what a difference a year can make.

Last year, the Steamboat Springs girls soccer team traveled to Golden where the squad was blown out in a 6-2 game. But Wednesday, the Sailors turned the tables on the visiting Demons, this time coming out on the winning side of a 5-3 game at Gardner Field. The victory extends the Sailor’s current winning streak to five games. 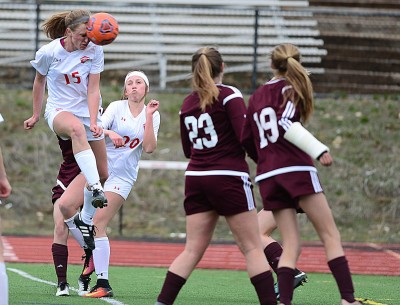 Steamboat’s Delaney Moon heads a ball toward the Golden Demons goal in the second half of Wednesday night’s soccer game at Gardner Field. The Golden goalkeeper stopped the header, but Moon was able to volley the deflection back into the net for the score. The Sailors won the game, 5-3.
Photo by John F. Russell – SteamboatToday.com

“It feels awesome,” Steamboat’s Delaney Moon said of the team’s streak. “I try to get into the mindset of each game and what we need to do to win that game. Then I can go forward from there.”

Steamboat coach Rob Bohlmann was happy with most of the things he saw from his team Wednesday.

“It’s a tremendous result for sure,” Bohlmann said. “We showed amazing grit in the second half, and the soccer was better. We still feel like we are not quite there, and that there is a lot more.”

However, the coach was happy with the result, the goals and the way the team kept fighting each time Golden climbed back into the contest.

“It was a good result tonight, we had some good goals and some good defending, and we showed the ability to come back and answer to their goals,” Bohlmann said. “We had all those intangibles and the right mentality. Now, we want to sit back and see how we can continue to make the soccer better.”

Sailors scored first in the game after Rachelle Koly crossed the ball to Izzy Rillos. Rillos then knocked the ball into the back of the net for the opening score 10 minutes into the game.

But the scrappy Golden team fought back after sophomore forward Emily Stec was able to put a foot on a shot that had been deflected in front of the goal but not cleared by the Sailors. The shot, 35 minutes into the game, made the score 1-1.

Steamboat regained the lead just a few minutes later after a Golden defender bobbled the ball near midfield. Steamboat’s Koly was able to take the ball away and streak 30-plus yards for the first of her two goals on the night.

But the first-half would end in a 2-2 tie after a long shot, off the foot of Golden midfielder Gracie Guerre with 45 seconds left, found it’s way into the back of the Sailors goal to close out a wild first half.

The battle continued in the second.

Moon scored on two different corner kicks in almost the same fashion. Both goals were set up by Lucy Wilson and both times Golden’s goalkeeper Katie Hageman was able to get a hand on Moon’s attempt to head the ball into the goal. But in both cases, Moon was able to volley the clearing attempt back into the net for the score. The first made the score 3-2 in the 51st minute, and the second gave the Sailors a 4-2 in the 54th minute.

“Both of my goals came off the same thing with a header and then a volley back in,” Moon said. “After the header, I saw the ball again, and it was right there. I knew that I could get it back in, and I did.”

Golden’s Guerra made things interesting in the final minutes after earning a free kick on the far side of the field just outside the 18-yard box. Her well-placed shot caught the back post before deflecting into the back of the net, making the score 4-3 with 20 minutes left to play. But Koly closed the door with her second and final goal of the game making the score 5-3 with less than 10 minutes left to play.