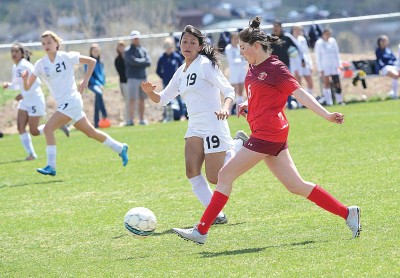 Steamboat Springs Ashley Spiegel makes a run toward goal in the second half of Saturday’s game against Rifle in Rifle.
Photo by John Russell

“That was my first goal of the season,” Gorrell said. “It’s pretty cool. I have scored a few times in the past, but it’s cool to get one in my senior year. I’m excited.”

The Sailors dominated Saturday’s game in Rifle allowing the Bears just two shots on goal, both in the second half. Steamboat also got scores from Sydney Graham, Lucy Wilson, Riley Hodges, Holland Reece, and two from Kelly Petix and Izzy Rillos.

The Sailors dropped to 10 players about 10 minutes in the second half. Gorrell’s score with just under 15 minutes left to play prompted officials to stop the contest with the mercy rule. The final score was Steamboat 10, Rifle 0.

“I think this win definitely brought us up and even though it was a different type of game, it gave us a lift, and we can keep going,” Gorrell said. “It was definitely good for us.”

Gorrell said the game was a nice way to end what turned out to be a rough week for the Sailors. Steamboat lost a tough game to Palisade in overtime 2-1 on Tuesday in Grand Junction, then fell to Battle Mountain on Thursday at home, 2-0. Battle Mountain scored early in that game before blizzard conditions rolled in during the second half limiting any chance for a Steamboat rally.

The win improves the Sailors record to 7-3 (5-3 in the Western Slope Conference) for the season with losses to Glenwood Springs, Palisade, and Battle Mountain. All three teams are currently ahead of the Sailors in the standings, but Steamboat will have another shot at Palisade and Glenwood in the next few weeks.

Despite the lopsided score, Sailor coach Bohlmann felt the Bears challenged his team in different ways on Saturday.

“I think they gave us a lot today,” Bohlmann said, “They presented our players with some problems that we had to solve that are different from other games — like their offside trap. When you have to solve problems, it makes you a better player and a better team.”

The Sailors will be back on the field at 6 p.m. Tuesday for a rematch with Rifle. The Sailors will then close out the week Friday where they will face Palisade for the second time in two weeks.