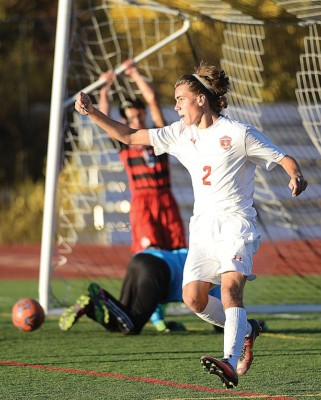 By the time halftime rolled around Tuesday at Gardner Field the memories of the Steamboat Springs High School boys soccer team’s two-game losing streak were all but forgotten.

Steamboat had come out hard and fast to take a 4-0 lead going into the half and added three more in the second to secure a 7-0 win against the visiting Glenwood Springs Demons. The victory helped the Sailors put tough losses to Battle Mountain and Summit County last week in the past.

“I think we were able to shake those setbacks off,” senior Alex Coffey said after the game. “We all came together after the Summit loss and talked about what we wanted to do and how we are going to accomplish that. Tonight was a great rebound for us, and I feel like we are on our way.”

In Other News: Donkey basketball at Steamboat Springs High School.
Cruz Archuleta set the tone early with a hard shot from the far right side of the field just inside the penalty area ten minutes into the game. Glenwood goalkeeper Jonny Hernandez was able to knock the ball down but couldn’t hold onto the rebound, leaving the door open for a charging Murphy Bohlmann, who touched the ball into an open net for the first score.

The pair teamed up again at the 26-minute mark when Archuleta sent a well-timed ball across the middle to a streaking Bohlmann, who shot the ball past the keeper to make the score 2-0.

Glenwood defender Forest Walker collided with Hernandez on the play and both players had to leave the game for several minutes.

Bohlmann recorded the hat trick a few minutes later, and then Quinn Connell got in the action after getting a nice through ball to make the score 4-0 at the half.

“This may be the most complete 80 minutes of soccer our guys have played all season,” Sailors head coach Rob Bohlmann said. “It helped that we had everybody back. We had to fight through a few tough patches this season, but it all really came together tonight.”

Steamboat got two second half goals from Will McConnell, with the first assisted by Marat Washburn and the second one assisted by Ross VanHara. Alex Coffey netted the last goal after getting a nice crossing pass from Lane Salyer.

It was a treat for Coffey who had been moved up to the front from his normal defensive midfield position.

“Normally I’m back there protecting Andy (McCawley), Coffey said. “It’s fun to play different positions because you learn more about the game, but definitely getting a goal is up there. I just kept thinking, ‘I hope this goes in.'”

Glenwood coach Wayne Smith credited Steamboat’s effort after the game and felt as if Steamboat was even stronger than when his team faced them earlier in the season.

“We knew coming in that they had lost to Summit and were a little down last week with injuries,” Smith said. “ But obviously they wanted to get back in it, and they really got after it tonight. Hats off to them, because they played really well.”

Smith said the Demons have been struggling to find the back of the net lately, and that continued Tuesday. He said the team is without its second leading scorer forward Clayton Horning. He said the team has been relying of its defense too much and Steamboat was able to take advantage of that in the game.

“We have to find a way to put a little more together in the attack,” Smith said. “We need to take the pressure off our defense and get forward a little bit”

It would be good news for the Sailors if Glenwood can find a way to do that later this week. The Demons will host Summit on Thursday in Glenwood. Steamboat will be off until Saturday when the team is scheduled to play Palisade at Gardner Field. That game was originally scheduled for 11 a.m., but the varsity game has been pushed back to 1 p.m. because of testing.