MONUMENT — The Steamboat Springs High School girls soccer team got goals from Sydney Graham and another from Rachelle Koly on Saturday, extending the team’s winning streak to six with a 2-1 victory against Lewis-Palmer in Monument. 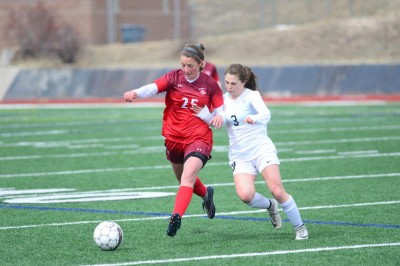 “I was extremely happy when that goal when in,” Graham said about her goal after the game. “I think we are really starting to come together as a group. There is a fluidity with all the different players and all the different grades.”

Graham’s shot, which came from about 23 yards away, looked like it would be stopped by the Lewis-Palmer goalkeeper Audrey Garcia. The hard shot, however, found it’s way through the goalkeeper’s fingers and into the back of the goal. The score came 28 minutes into the contest, giving the Sailors a 1-0 lead that would hold until halftime.

A fired up Lewis-Palmer team returned to the field for the second half and pressured the Sailors with hopes of getting back into the game. The Ranger’s big opportunity came 52 minutes into the contest when Rilee Britton made a run up the sideline getting behind the Steamboat Springs defense. She sent a hard crossing pass in front of the Steamboat goal where her teammate Adrianna Cook was able to volley the ball into the back of the net and tie the game at 1-1.

But the Sailors were not done.

With less than 20 minutes left to play, a Sailors free kick found the feet of Delaney Moon inside the 6-yard-box. The Steamboat Springs junior was able to make a tight crossing pass to the feet of Rachelle Koly who knocked the ball into the net for what turned out to be the game-winning goal.

The victory was the Sailor’s sixth victory in a row and improves Steamboat’s record to 6-1 for the season. The Sailors will be on the road again Tuesday for a Western Slope Showdown with Palisade, and then back home for a rematch with Battle Mountain. The Huskies will be looking for some payback after losing to the Sailors in a 2-1 contest earlier this season.

The Huskies have won five straight games since losing to Steamboat on March 20 including a win against previously unbeaten Glenwood Springs and Palisade.

Head coach Rob Bohlmann said it’s going to be another big week for the Sailors but felt like the trip to Colorado Springs had brought the team together and allowed some of the players’ personalities to come through.