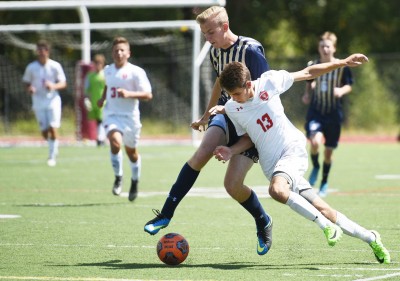 Steamboat junior Murphy Bohlmann cuts off a Mullen defender Saturday. Bohlmann scored one goal as Steamboat played to a 2-2 draw with the Mustangs.

STEAMBOAT SPRINGS — Even the Sailors themselves had some questions heading into Saturday’s season opening soccer game for the Steamboat Springs High School soccer team against Mullen.

They played Mullen a year ago, losing in lopsided fashion. The Mustangs return this year as the No. 10 Class 4A team in the CHSAANow.com preseason poll. Steamboat, meanwhile, lost more than 60 percent of its scoring and its standout goalkeeper from last year’s squad.

Steamboat got resoundingly positive answers to any questions it may have had. The Sailors played Mullen to a 2-2 draw, just — juuusssstttt — missing on several late opportunities to win outright.

“It was great to play well as a team for our first game,” senior goalkeeper Cruz Erickson said.

He was instrumental in keeping the Sailors in the game, racking up a dozen saves.

“We were pretty organized, attacking well the whole game,” he said. “Everyone was pushing each other to go for that last goal. We didn’t get it, but it was a good start to the season.”

Mullen scored first, a strike from Christian Rapp, but the Sailors evened things up when Jason Oehme put away a free kick in the first half. Steamboat then took a 2-1 lead when junior Murphy Bohlmann slid a shot by the Mullen keeper’s left hand.

Mullen got its own answer, from Ryan Irvine, 10 minutes later, eventually sending the game to overtime.

Steamboat got its best chance to win early in the first of two overtime periods. Bohlmann launched for a diving header, hoping to put away a strong pass.

The ball lingered in front of the goal. Steamboat missed on a more set header attempt, then on a sharp shot.

Even with though those opportunities left a sense of “what could have been,” the Sailors weren’t at all disappointed with what was.
They’ll launch into their at 6 p.m. Thursday at home against Glenwood Springs, and despite coming just short of a win Saturday, they’ll do so with plenty of confidence.

“It was a good start to the season,” Bohlmann said. “We’re looking forward to the rest.”