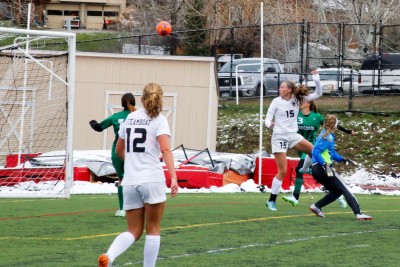 Delaney Moon’s Header proved to be Game Winner against Delta.

SteamboatToday.com — Saturday’s opponent was a difficult one for the Steamboat Springs High School girls’ soccer team. No, it wasn’t about overcoming a three-win Delta team, but about fighting off the emotional and physical fatigue of Friday’s key 2-0 win against Palisade.

And, it was also about not looking ahead to Monday’s goliath matchup with Battle Mountain, which will decide the league title.

“We did what we came out to do. Our goal was to have no goals against, and we did that, so that was good,” SSHS senior Jordi Floyd said. “It definitely wasn’t as sharp as we are looking for, normally, but coming off a big win (Friday) night, it can be expected.”

The Sailors had no trouble with Delta (3-11), netting a 3-0 win at Gardner Field that gave Steamboat the season sweep after a 5-1 win March 19. SSHS used 23 different players against Delta in the rematch, its depth allowing the starters some extra rest before Monday’s trip to Edwards.

“They met the challenge really well, playing two games back-to-back. (Friday) night, there was certainly a lot of emotion, a lot of physical effort that went into that game,” Steamboat coach Rob Bohlmann said. “We were able to call on some players within the program and look to manage legs. It was a great program result today.”

Steamboat led 2-0 at halftime, the first goal coming nearly six minutes in when senior Mackenzie Gansmann found freshman Delaney Moon for brilliantly deflected header. Midway through the period, senior Natalie Bohlmann scored after junior Brooke Buchanan made a tremendous effort to keep the ball from going off the end line.

The third and final goal came 10 minutes into the second half when Natalie Bohlmann found Floyd, whose shot tipped off the glove of the Delta goalkeeper before finding the back of the net.

“There were definitely a lot of good chances. I didn’t do a good job of putting away mine,” Floyd said after missing out on numerous scoring opportunities early in the game. “Monday is huge. I can’t wait. It’s going to be so fun. It’s going to be the best game, and we all know what we have to do. They are definitely ready for us.”

Monday’s game — which had been originally scheduled for April 15, but was delayed due to a winter storm — is somewhat unfamiliar territory for the Sailors, at least in recent years. SSHS is 12-1 overall and 10-0 in league play, including a 5-0 win over the Huskies on March 22 in Steamboat. Battle Mountain, a team that rarely has to look up to anyone, is 10-2 overall and 9-1 in league play; its other loss came March 28 to Silver Creek, 2-0.

“You create your opportunities, and we were able to create things, and that game went our way,” Rob Bohlmann said of the first matchup with Battle Mountain this season. “They find themselves as the hunter, and we are the hunted, and that’s different for both of us. Because, for the past years, those roles have been flip-flopped.”

With only a home game against Eagle Valley (4-6-2) remaining on Steamboat’s schedule after Monday, should the Sailors top Battle Mountain, it would mean an outright Western Slope League title. A loss would result in a tie with the Huskies atop the standings.

Monday’s game is scheduled to start at 6 p.m. in Edwards.