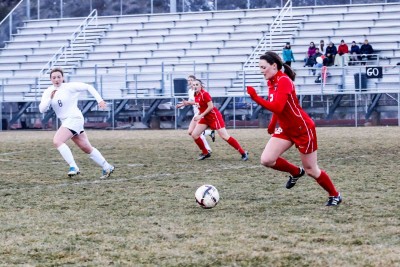 The 2015 season started on a high note for the Sailors Women’s Soccer Team. Just 6 minutes into the game, Freshman Striker Kelly Petix was able to find the back of the net off a pass from Brooke Buchanan. Petix didn’t stop there, notching 1 more goal off of a darting run down the side and slot back by Junior Mackenzie Gansmann. Not to be outdone Jordie Floyd found the back of the net just two minutes later off a cracker from the right side of the 18 yard box, off a pass from Senior Eliza Leeson. Up 3-0 in the first 9 minutes, the Sailors hunkered down for the rest of the half and with the help of Junior Goalkeeper, Ocoee Wilson, were able to keep the score to 3-0 at half.

The Second half was entirely a different story. Glenwood Scaraped back and after 1 more unassisted Goal by sophomore Brooke Buchanan, the Sailors found themselves on their heals. the Demons were able to pull one goal back quickly to bring the game to 4-1. Senior Megan Williams joined the Sailors attack with 18 minutes left and was able to put home her first touch of the game to bring the game to 5-1.  The Demons then went on a 3-0 run of their own, looping three goals over Wilson to pull within 1 with just 8 minutes left. A few frantic subs by the Sailors was enough to right the ship and keep the win in tacked for the first Game of the season.

Sailors play next at Home against Summit County at 6pm on Tuesday and another game on Thursday. Be sure to come out and support your Sailors!