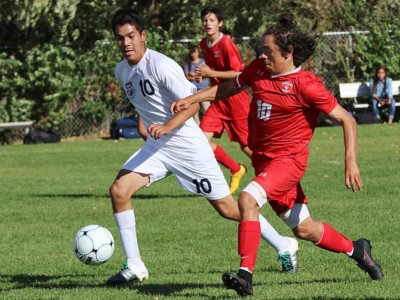 Steamboat Springs senior Cruz Archuleta charges down the field with the ball Thursday in what was a 5-1 win against Rifle.

The Steamboat Springs High School soccer team picked up a win Thursday night, going on the road to knock of Rifle, 5-1.

Steamboat built a 5-0 lead in the first half. The Sailors got goals from Cruz Archuleta, Quinn Connell, Cruz Erickson, Marat Washburn and Lane Salyer, all each scoring one. Connell and Will McConnell also each had an assist.

The Sailors were without some of their key starters, who were still rehabbing injuries and had other scholastic obligations, with this game being a midweek game. The gaps in the lineup provided the Sailors an opportunity in the second half to get some much needed time for a few JV players on the pitch to improve the Sailors depth going into the second half of the season.  Brian Arias,  Gabe Davis, Alejo Quezada and Kevin Kaster all saw time in the second half.  Cruz Erickson also saw his first minutes in the goal for the varsity squad.

The Sailors improved to 5-1 with the win. Next up for the squad is a big showdown at noon Saturday at home against undefeated Centaurus. Centaruas is currently ranked 9th in the state by CHSAAnow.org. The Saturday game starts at Noon at Gardner field at Steamboat Springs High School.