SteamboatToday.com – The first loss was bound to happen at some point for the Steamboat Springs High School girls’ soccer team, but knowing that doesn’t make it any easier.

Saturday against visiting Centaurus (3-1) at Gardner Field, the Sailors fell, 2-1, in double overtime, their first defeat after starting the season with seven straight wins. 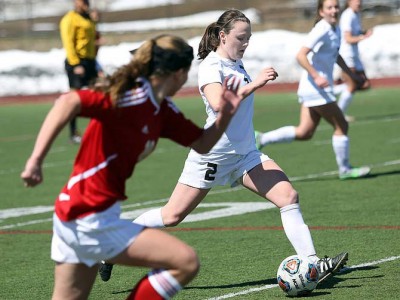 Photo by Austin Colbert
Steamboat Springs senior Jordi Floyd races upfield with the ball against Centaurus on Saturday at Gardner Field. The Sailors lost for the first time this season, losing 2-1 in double overtime.

“This is a game that you don’t like to lose, but it teaches you those things as we get closer to the postseason,” Steamboat coach Rob Bohlmann said. “It teaches you to be hungry. There is zero room for complacency — which we didn’t have coming into this game — but it really puts it in front of your face that every game is winnable, and every game is losable.”

The loss is even more difficult to choke down given the fact that Steamboat outshot Centaurus 25-10 for the game and controlled the offensive tempo much of the afternoon. The Warriors’ first goal came midway through the first half on a penalty kick, putting Steamboat behind on the scoreboard for the first time this season.

“The bright spots that we bring away from this, this is the first time we had to deal with the adversity of coming back from behind,” Bohlmann said. “And we didn’t even skip a beat. I think that speaks really highly to the character of this group.”

The Sailors tied the game at 1-1 about nine minutes later after senior MacKenzie Gansmann found her way behind the Centaurus defense — including its goalie — for a clear shot. The goal sent the teams to the locker room locked at a goal each.

The second half seemed to belong to the Sailors, but attack after attack netted no goals, and the teams had to settle for overtime. The Warriors overcame Steamboat’s aggressiveness by scoring in the first minute of the second overtime period, with senior Elizabeth Maierhofer’s goal putting an end to the game.

“The girl did a great job getting behind the defense,” Bohlmann said of Maierhofer. “Our time was in that first 25 minutes of the second half. We created, obviously, numerous opportunities.”

Steamboat (7-1) is off until Tuesday when it travels to Glenwood Springs.