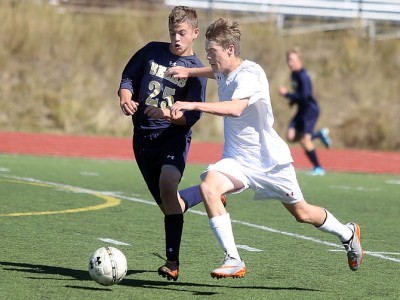 It’s safe to say the Steamboat Springs High School boys’ soccer team has this overtime thing down pat. On Saturday against visiting Palmer Ridge at Gardner Field, the Sailors escaped with a 3-2 overtime win, their second OT win in as many games and third in three tries this season.

“The first time, it’s like, ‘OK, you got the job done,’” SSHS soccer coach Rob Bohlmann said. “The second time you win, and hey, you really earned it. The third time, it’s a pattern. There is a pattern to the character, the desire, the work rate that this group has.”

In Steamboat’s season opener at Glenwood Springs, the Sailors won 5-4 in extra time after relinquishing a 4-2 lead. On Thursday, it was senior Jack Salyer’s free kick with about a minute to play in double overtime that gave SSHS a 3-2 win over Eagle Valley. On Saturday, it was a frantic header from junior Will McConnell less than two minutes into the first overtime that kept Steamboat perfect in OT games this year.

“It also says a lot about what we can do in overtime,” McConnell said. “This is our third overtime victory this year, so it just shows we can push it through to the end and work hard to get the win.”

The Sailors trailed 1-0 to Palmer Ridge after giving up a goal in the 12th minute. But they found the equalizer with about 14 minutes to play in the first half, when Salyer’s cross found senior Charlie Beurskens, who knocked the ball into the goal, despite a Bear defender breathing down his neck.

Tied at a goal each early in the second half, SSHS junior Ross VanHara was in the right place at the right time, scoring on a deflected corner kick to give the Sailors their first lead.

“They weathered the storm really well,” Bohlmann said of the early deficit. “And that’s an important part of the game, because you have those ebbs and flows, you have those periods where it just seems the other team is coming at you. You can’t panic. You have to weather the storm and then find a way to break that rhythm.”

It looked like clear sailing for Steamboat to the finish, but Palmer Ridge managed to tie the game when Nick Boldvich scored off a set piece with less than 12 minutes to play.

SSHS wasted no time getting the win in overtime, however. Barely a minute in, the Sailors were awarded a corner kick, which came down in front of the Palmer Ridge goal. There, Steamboat managed to get off two or three shots before McConnell’s header ended it.

“There was kind of a scrum, the ball popped in the air, and I just jumped up, got over it, and headed it down the line,” McConnell said. “Next thing I knew, it was in there. I was kind of surprised, as well.”

SSHS junior goalie Andrew McCawley had one of the best performances of the season, recording 19 saves.

“He had a great game and was able to keep us in it, especially early on,” Steamboat assistant Casey Barnett said.

The non-league win moves the Sailors to 7-1 this season, which includes five straight wins. SSHS next hosts Palisade on Saturday, the final game of a four-game home stand.