Steamboat Springs — Ocoee Wilson would have been the last to attempt a penalty kick for the Steamboat Springs High School girls soccer team in the post-overtime dual against Silver Creek Saturday at Gardner Field, the season hanging in the balance. 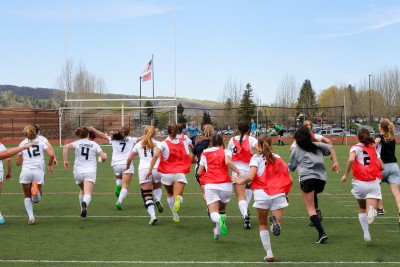 But the senior goalkeeper never gave herself the chance. Instead, Wilson put the game away in net with a key save that led to a 3-2 PK win for Steamboat after the teams played through two overtime periods locked at a goal each.

“She’s been waiting her whole life for this … if it would have come down to that, she would have gotten the job done,” SSHS coach Rob Bohlmann said. “This was calling Ocoee’s name for a long time, for her to finish out and put that exclamation mark on what this whole group did today.”

The win sends the Sailors (16-1 overall), the No. 8 seed in the Class 4A state tournament, to Thursday’s quarterfinal match against top-seeded Lewis-Palmer (16-1). The Rangers defeated No. 16 D’Evelyn 1-0 Saturday and will host the quarterfinal game.

This is the first time the Sailors have gotten past the second playoff round under Bohlmann, who took over the girls’ program in 2002.

“Their hearts are so big, and no matter what obstacle we faced all year, they played through it, they’ve stayed together and they’ve come together as a team,” Silver Creek coach Pat Monacelli said about his Raptors. “Soccer people said for years there has got to be a better way, but they haven’t figured one out yet. So, it’s always the roll of the dice when you get to PKs.”

The penalty kicks were only the closing chapter in a drama-filled, second-round game. The Sailors had some of their better offensive attacks in the first half, but, like Silver Creek, never capitalized, and the teams went to halftime scoreless.

The defensive battle was expected from both coaches. Neither team gives up many goals, and both boast a talented goalkeeper, so nobody expected a shootout.

“We handled them very, very well,” Monacelli said of limiting Steamboat’s offense. “I thought we did a really nice job of shutting down what has been a very, very potent attack all year long. So, I can’t fault us at all. We played the game I expected us to play.”

Silver Creek was the first to score, a header by senior Katy Foster off a corner kick, giving the Raptors a 1-0 lead with about 24 minutes to play.

This didn’t worry the Sailors, however, even though time wasn’t on their side. With a touch under 14 minutes to play, SSHS junior Brooke Buchanan put a shot into the top-right corner of the net to even the scoreboard at one goal each.

“We are so good at playing our game and getting our stuff together when things get hard,” Buchanan said. “I don’t really remember it a lot, just because I was so in the moment. I knew my team was there for me, and I should just take the shot.” 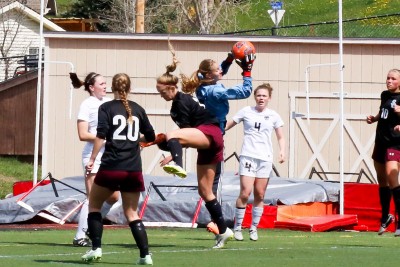 Between Buchanan’s goal and the end of the second overtime period, Silver Creek was issued a pair of red cards and finished the game down two players. Despite the advantage, the Sailors couldn’t find a way past the dense Raptor defense, and the teams had to decide the game with penalty kicks.

“Silver Creek, when they went down the second man, they did very well to defend,” Bohlmann said. “But, there was never a doubt that it was going to happen. Just the energy, the character of this group, one way or another, we were going to get the result.”

Win or lose, Wilson was already the star of the game heading into the PKs. She finished with 25 saves —many of them difficult — and faced nine corner kicks, all while the Sailors’ offense was limited to seven shots on goal.

Still, Wilson knew it was up to her to get them through the PKs.

“It’s still really stressful, because you know the whole game is now on your shoulders,” Wilson said. “I don’t think we ever got very lucky this game. Luck comes from when it hits the post or the crossbar. I think that was more (a matter of) we made a mistake and were able to fix that mistake before it turned into a big issue.”

Both teams made their first penalty kick — senior Jordi Floyd scoring for the Sailors — before Silver Creek had its second attempt bounce harmlessly off the right post. Steamboat took the 2-1 lead seconds later on a successful PK from freshman Delaney Moon.

The Raptors scored on their third attempt, only to have SSHS senior Ellese Lupori answer, the Sailors holding a 3-2 edge after three kicks each.

Both teams missed their PK in the fourth round, Wilson coming up with a vital save against Silver Creek’s Holly Bosley. In the fifth and final round, the Raptors had to score to extend the game, but the shot deflected off the upright, and Wilson soon found the rest of her teammates racing out to celebrate with her in front of the Sailor fans.

“I had tears in my eyes … to have come up big in this game just kind of means the world,” Wilson said. “The big thing about this team is we love each other and always are there for each other. That ending, where we all come together and the whole town is basically here watching, is an amazing feeling.”