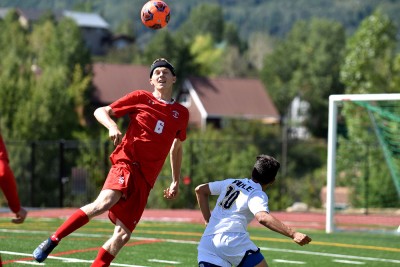 In the season opener, the Bears defeated the Sailors 3-2 from Gardner Field on Saturday, Aug. 31.

“It’s one game. It’s the start of the season,” Steamboat head coach Rob Bohlmann said. “We knew Rifle is a program that’s been building for the past three years. The coach has done a tremendous job. They’re very well-organized, and it was a really good test for us.”

Facing a 2-0 deficit, Steamboat started the second half with renewed energy. Bears junior goalkeeper Alex Flores saw as much action in the opening five minutes as he did in the entire first half.

With 31 minutes left to play, a series of quick passes allowed Steamboat senior Oliver Caparrelli to break away up the right side, collecting the ball just outside the 18-yard line. He brought it slightly inside, firing a cross pass along the front of the 6-yard box. Junior Colter Gansmann and senior James Berntsen both slid to try to shove the pass into the net, but both missed, squandering Steamboat’s best chance yet.

Just two minutes later, Gansmann made up for the wiff, beating Flores near the 18 with a simple side step before tapping the ball in with his left foot uncontested.

The Steamboat momentum didn’t last too long, though.

As the clock hit 23:30, Caparrelli blocked a shot in front of the net, crashing into a Bear player while also tying up Sailors sophomore goalkeeper Axel Kovach. The clearly-hurting Caparrelli tried to get up, half-heartedly motioning towards the ball as a Bear easily worked past him and the still fallen Kovach. It was a good goal, stretching the Rifle lead back to two.

“I was super frustrated,” Caparrelli said of the situation. “We’ve played other games where that’s happened, and we’ve got goals called off.”

After a few short minutes on the bench, Caparelli returned as an attacker and with a vengeance. At the 18 minute mark, his frustration escalated when he put the ball in the net, but was called offsides.

With 14 minutes remaining, he had another chance, ripping the ball from wide right, throwing his hands up when it deflected off the crossbar.

Three and a half minutes later, he finally broke through. Caparrelli raced up the right side to reach a pass, this time carefully picking his spot. Keeping the ball on the ground this time, he snuck it between Flores and the post, trimming the deficit to a single goal.

“When I came off from that head injury and came into attack, I knew we needed speed up top,” Caparrelli said. “Me and James Berntsen, we have good chemistry. Having him play in the midfield, he could send me through balls. That’s how both our goals (happened). One of them was called off, but that’s how our goal was. I knew there had to be something done through the top.”

While the offense kept pushing, Kovach kept the Sailors (0-1) in it, putting himself in a position to save free kicks and multi-man attacks from the Bears (1-0).

“I thought our goaltender was really courageous and made some good saves,” Bohlmann said. “Across the board, I think that was a slow start, and things got better. I think there were nerves, which is pretty typical. They settled in, and it got better along the way.”

The first half decided the game, as Rifle scored in the first seven minutes. It was back and forth for a long time, but the Bears cracked the determined Steamboat defense once more as a Rifle attacker beat a charging Kovach, easily adding to his team’s advantage.

“They had one shot on goal more than us. Where the difference was, we were forceful in the first half,” Bohlmann said. “It really didn’t create the quality opportunities that we would have liked.”