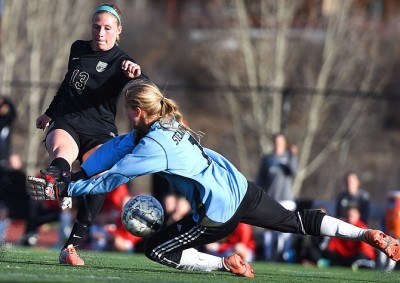 Through some eyes — certainly Steamboat’s — each of the Battle Mountain girls soccer team’s goals Tuesday night in a game at Steamboat Springs could be described as fortuitous.

The Huskies scored three times off rebounds, a late-arriving player smashing a rolling loose ball in for a score. The fourth goal came literally as the buzzer sounded on the first half.

A few seconds here, a different bounce there, and maybe Battle Mountain doesn’t score anything.

Huskies coach David Cope acknowledged that it was a games of inches, but he said fortuitous wasn’t the right word.

His team was relentless, and Tuesday, its dogged pursuit of the Sailors earned it a 4-2 win and thus its third consecutive Western Slope League championship.

“This group is relentless,” Cope said. “That’s a trait of our team we’re very proud of. Every group you have is different, and that’s a train of this group.”

Battle Mountain got two of its rebound goals early, the first, nine minutes in from Morgan Croke and the second at the 21 minute mark and from Emily Cope.

Both came after aggressive, strong saves from Steamboat goalie Ocoee Wilson. Both came after the ball bounced away, however, right onto the foot of another hard-charging Husky.

It added a third goal just as the first-half buzzer sounded when Logan Nash worked her way around Wilson, beat a defender and rolled the ball in.

“She’s very good, but with every keeper, once you get a touch around them, it’s all you, and you have to put it away,” Nash said.

Steamboat wasn’t finished, and for one second-half stretch, it appeared the Sailors might piece together an epic comeback.

Logan Sankey scored for Steamboat, turning the tables of Battle Mountain by putting away a rebounded shot 19 minutes into the second half. Jordi Floyd made things really interesting two minutes later when she hammered in a shot from 25 yards out, making it 3-2.

“That was a great goal,” Cope said. “We knew at halftime, at 3-0, they wouldn’t give up. (Steamboat coach Rob Bohlmann) had his team prepared to play, and they have a great spirit, so we know it would be a game in the second half.”

Battle Mountain got one more second-chance goal, however, another from Nash with 11 minutes, 28 seconds remaining to put the game away.

The win dropped Steamboat to 8-3 and 7-3 in league play. It now prepares for a pair of road games, Saturday at Centaurus and Monday at Palisade.

Battle Mountain, meanwhile, is 10-0 overall and 9-0 in the league, meaning that, even if it lost its final three league games, it’d still end up in a tie and own the tiebreaker.