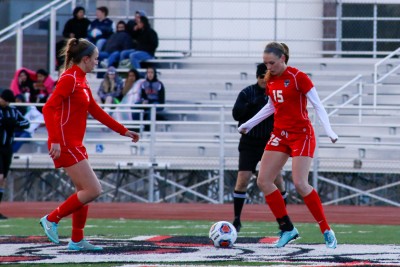 It took less than 90 seconds for the Steamboat Springs Sailors Women’s soccer team to get on the scoreboard Thursday night in Eagle Valley.  Jordi Floyd sent a crossing  through pass to Junior Brooke Buchanan who with three quick touches was able to slot home the first of 3 goals for the Sailors on the night.

In the 31st minute, Senior Natalie Bohlmann was able to finish home a corner from Junior Maggie Henry to put Steamboat up 2-0. The Sailors came out strong in the first half, dominating the midfield and only allowing 4 shots on goal. Anchored by Seniors Ellese Lupori and Logan Sankey, the Sailors were able to control the back line with speed and effectiveness while giving the offense more than 15 chances on net to Eagle Valley’s 4.

The second half of the game showed the depth of Steamboat’s roster with 18 players finding time on the field, even allowing Lupori and Sankey opportunities to chances at goal from Steamboat’s midfield. Sankey was able to capitalize on the opportunity to get forward, when freshman Delaney Moon, was able to get around the defense in the end line to slot the ball back to Sankey for a one-time finish to put the Sailors up 3-0 in the 58th minute of the match. It was Moon’s 7th assist on the season.
The 3-0 final was the fifth shut-out on the season for Senior goalkeeper Ocoee Wilson, and moves the Sailors to 7-0 (6-0 in league) on the season.

The Sailors return home for a 1 p.m. game Saturday against Centaurus.

Sailors had a great night with Varsity winning 3-0 and JV winning 6-2.