Gypsum — The Steamboat Springs High School girls soccer team came away with three, first-half goals against Eagle Valley on Saturday to secure a 3-0 victory and extended the team’s winning streak to four games. 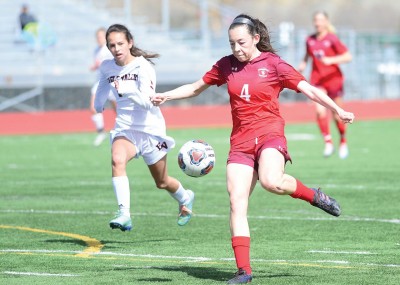 Rachelle Koly sends a ball in front of he Eagle Valley net during Saturday’s game against Eagle Valley.
Photo by John F Russell

The first came a little more than 20 minutes into the contest after Izzy Rillos set up Rachelle Koly for the game’s first goal putting Steamboat up, 1-0.

“I was really excited because all week we were working on our first touches, and our first touches to goal,” Koly said. “That first ball, which I think Izzy played to me, was my first touch to goal. It was exciting to apply what we did in practice to the game.”

The next two goals came off the foot of sophomore Sophie Leeson. The first was set up after Koly sent a ball deep inside the box where Leeson, who was in front of the goal, got just enough of the bouncing ball to push it into the net. The second goal came when Leeson fired a shot from outside the 18-yard box in the final seconds of the half.

The goals were huge for the Sailors who also had to battle a stiff wind for the entire first half. In the second the wind was at their back, but Eagle Valley came out with an aggressive attack with hopes of getting back in the game.

“I thought the girls played a very complete 80 minutes,” Bohlmann said. “Certainly there were those moments especially at the start of the second half where Eagle Valley really buckled down to come back and try to create some things. They started to come together and had a nice stretch of 10 minutes. But we were able to reel the game back in after that.”

Bohlmann was happy that the team played defensively.

“We didn’t concede anything,” Bohlmann said. “Especially in the first half with the wind on our face. There was a lot of emphasis not to allow goals on set plays, and we did a good job with that. There are a lot of things that we take away. ”

The Sailors’ only loss came to Glenwood Springs in the season opener March 10. Since then the Sailors have topped league opponents Battle Mountain, Summit County, twice, and now Eagle Valley. The Sailors have outscored the other teams 11-3 in that stretch.

The team’s next game is at 4 p.m. Wednesday against Golden at Gardner Field in Steamboat. That game had been scheduled for earlier this season but was pushed back because of a spring snowstorm that made travel conditions difficult. The Sailors will also travel to Monument next Saturday to face Lewis-Palmer. Both games are non-league contests.

“It’s a really great opportunity against two quality opponents. They are front range teams,” Bohlmann said. “Results are one thing, but this is an opportunity to continue to improve and develop. Hopefully, we can continue to play our possessional style soccer and our attacking style of soccer against good opponents outside our league.”