Oehme curls it to lift Steamboat soccer to win over Summit 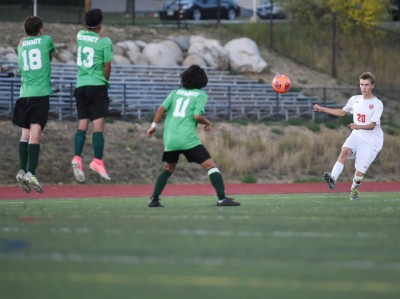 Steamboat senior Jason Oehme launches a kick Thursday against Summit. He scored on a similar play later in the game, giving the Sailors a 2-1 victory.

It’s not easy bending a ball around a line of defenders set in front of you to prevent just such a shot. Jason Oehme, a senior on the Steamboat Springs High School boys soccer team, likes to come up to Gardner Field to work on it during his off-time, when no one’s around practicing.

“I love to just come out and shoot and try stuff with the ball,” Oehme said. “It pays off during the season.”

That work certainly paid off for the Sailors on Thursday late in a big game against Summit.

Oehme blasted a free kick from 25 yards out, watched it curve around the line of Tigers in front of him, then threw up his arms as it sliced just past a leaping goalkeeper’s hand and into the corner of the net.

The goal gave the Sailors a crucial 2-1 win in the Western Slope conference.

Steamboat got its first goal from junior Murphy Bohlmann, who scored his 11th of the season in the team’s sixth game. He actually didn’t have a huge role in setting that one up. Teammate Daniel Lopez danced through the Summit defense before being taken down in front of the goal, earning himself a penalty shot.

That shot deflected off Summit keeper Kyle Wertz, but Bohlmann rushed in to put back the rebound to make the score 1-0.

Things evened out for Bohlmann with that second goal. With about four minutes remaining, he slipped away from the defense with the ball at midfield, racing toward a potential game winner. He was tracked down and sandwiched by a pair of Summit defenders, however, drawing the kick Oehme eventually put away.

“I could just see how they were setting it up, and I knew it was the right distance,” Oehme said. “I tried to curl it around the wall, and the goalie couldn’t see it because of the wall. It’s a great feeling to see it hit the back of the net.”

It was an important win for the Sailors, coming off their first loss of the season Tuesday at Battle Mountain. Steamboat’s now 4-1-1 on the season and 4-1 in the Western Slope.

The Sailors will be in good position to defend that position, as well, as they approach the midway point of the league schedule.

That schedule underwent some changes Thursday.

The Sailors will play at 4 p.m. Saturday to make up for a game originally scheduled to take place earlier this month in Steamboat. The Bears will then make the trip to play at Steamboat on Oct. 3.