On a night worthy of a tall tale, Steamboat soccer advances in playoffs 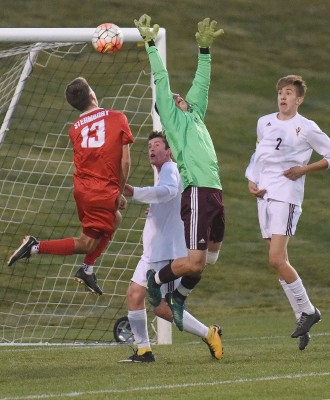 Shot by Will Beurskens goes over Golden’s Goalkeeper Brandon Shull, to put the Sailors up 1-0 in the first half.

GOLDEN — When they tell the story in 20 years, they’ll say the wind was blowing 60 miles per hour.

When they tell it in 40, they’ll say the shot — the big shot — hung in midair, straight up stopping for so long you could have finished a bottle of water between the time Steamboat Springs High School senior Will Beurskens struck it from 65 yards out and the time it came crashing back down to Earth, two inches above the outstretched fingers of leaping Golden goalkeeper Brandon Shull, cutting just inside the crossbar and into the net.

In 60 years, they’ll say it hung so long you could read a book.

They’ll most certainly tell the story, and much of it will even be true.

The wind did whip Wednesday as the Sailors took the field in Golden, underdogs in the opening round of the 32-team state playoffs.

It blew steadily at 20 miles an hour and gusted to perhaps 40.

The shot hung for seconds, not minutes or hours.

You couldn’t have read a book.

It did crash into the goal, however, and by virtue of a 1-0 victory against Golden High School, the No. 12 seed in the state, it did send Steamboat, No. 21, on to the second round of the Class 4A state tournament for the first time since 2011.

“It was a blue-collar effort,” Steamboat coach Rob Bohlmann said. “We brought the energy and the leadership, and that’s what got the job done tonight.”

Steamboat will now play The Classical Academy, the No. 5 seed in the tournament and a 7-0 winner Wednesday against Longmont.

Beursken’s goal came early, in the 16th minute, and it wasn’t even the best chance Steamboat had earned to that point. An aggressive, physical approach from the Demons led to a takedown of Steamboat leading scorer, Murphy Bohlmann, in the box and gave the Sailors a penalty kick in the 13th minute.

Shull, in goal for Golden, was all over that one, diving to the ground and scooping it up.

Bohlmann drew a free kick at midfield several minutes later, however, and that gave Beurskens his stage.

They lined up over the ball at midfield and swung away.

“I hit it as hard as I could,” Beurskens said. “I just wanted to get it on goal.”

The wind swirled. It was blowing away from the goal moments later, and it blew side to side across the field for much of the game.

That shot, however, the wind hung it up in the air, then sent it hurtling back down.

“I guess I got lucky,” Beurskens said. “I didn’t think about it too much. I just kicked it.”

It was so well placed there was little that could be done to either aid it or stop it.

“It was the wind,” Shull said.

A freshman, Shull was flawless through the rest of the game, and his team in front of him was pretty sharp, as well. He dove to stop Steamboat’s next best opportunity, a swift strike from junior Quinn Connell in the waning moments of the first half, then mostly watched in the second as his teammates put the pressure on the Sailors.

Golden pressed for every opportunity on the other end of the field, and the Demons just missed on half a dozen. A header in the first half crept inches above the goal. Several clean shots roared 10 feet over it and more were blown safely to the side by that wind.

Steamboat’s defense hung in through it all, deftly turning away attempt after attempt as they battled that same confounding wind.

“It was weird. Every time we’d play the ball in the air, it would come all the way back and it was hard to time when it would fall out of the air,” Steamboat senior Jake Berry said.

Golden controlled most of the final 10 minutes. Sailors’ goalie Cruz Erickson had several big saves, charging into a melee in front of the goal to pull down one close call, then diving to take the ball out from in front of an attacker later.

The ball even slipped behind him but was headed away by another Sailor defender on the goalline.

“It got me once,” Erickson said of the wind, “but my defenders had my back.”

It was a wild finish, Golden’s increasingly furious jabs just missing, high, left and right. Finally, Steamboat regained control and pushed the ball down the field just as time expired.

UPDATE: The Sailors will take on The Classical Academy in Colorado Springs on Tuesday Oct 31st, 2017 at 4:30pm in Round 2 of the 4A State Playoffs.