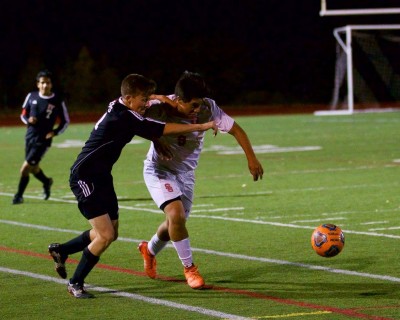 Bohlmann recorded his third consecutive hat trick as the Sailors beat the Devils in Steamboat Springs, 3-1.

“They didn’t keep their composure. It influenced their game, and it helped us play better,” Steamboat junior Dylan Worrell said. “This win is great for us. It’s pushing us forward into the season undefeated.”

A seemingly whistle-to-whistle running, biting commentary between the two teams on the field boiled over into more after the final whistle. One Devils player ripped off his jersey, and a Steamboat player confronted him as he walked off the field.

The two players, quickly backed up by scrambling teammates, traded shouts before officials arrived to calm things down. It was all enough, the officials said, to warrant a report to the Colorado High School Activities Association.

That emotion was prevalent throughout the game, and Eagle Valley coach Jere Simms said how his team handled it may have been a factor in the result.

“My guys have to maintain a stronger mental capacity,” Simms said. “Not every call is going to go our way, and it’s for us to maintain poise and execute whatever we need to do to get the three points.”

Murphy Bohlmann’s torrent of goals put the Sailors on top early. He took a ball played by Daniel Lopez deep into Devils’ territory and earned a penalty kick. He put that away with a sharp, low shot into the left-hand corner of the goal.

He buried another late in the first half while working along the baseline and scored his final goal midway through the second half.

Quinn Connell played a ball right up the middle of the field, finding Bohlmann in stride. A quick move on the keeper allowed Bohlmann to put away his 10th goal of the season in what’s just the team’s fourth game.

Tuesday’s scores push Bohlmann into a tie for second in Class 4A in scoring.

That scoring combined with some stout defense and a few key saves from Steamboat goalie Cruz Erickson paved the way for Steamboat’s win.

Eagle Valley did manage to crack that Sailors defense late.

Devils’ junior Elian Gonzalez launched a shot in from 20 yards in the 75th minute.

Eagle Valley nearly scored another in the waning seconds, the ball bouncing in front of the goal before Erickson could securely scoop it up. Despite some passionate argument from the Devils, officials ruled it never quite crossed the line. Moments later the final buzzer sounded, and the post-game extracurricular activities ensued.

“There was a lot going on,” Steamboat coach Rob Bohlmann said. “You can’t initiate, and you can’t respond. We had a couple of players. For the most part, I thought we did nicely, played with poised. You’ve got to bring the emotion into a game like that, but it is a difficult thing and that’s a part of growing up, learning and playing sports that you play with emotion, but when it gets chippy, you filter in poise.”