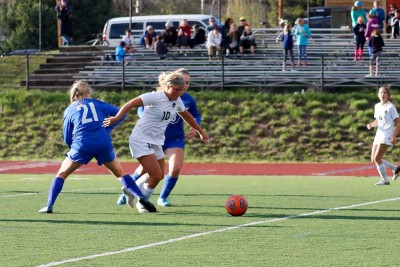 The devil plays for the Steamboat Springs High School girls soccer team, and her name is Ellese Lupori. At least, “El Diablo” is the moniker Sailors coach Rob Bohlmann has given Lupori’s other half, the ferocious senior defender who has carried Steamboat to the second round of the Class 4A state playoffs.

“Ellese is the sweetest girl off the field, but when she steps on, her alter ego steps in. She is tenacious,” Bohlmann said. “It’s everything you would want from a leader and a central back. The rest of that back four, they feed off her vibe. Really, the whole team feeds off of Ellese’s vibe.”

Lupori is the leader of a Sailor defense that has allowed only seven goals all season entering Saturday’s 10 a.m. playoff game against No. 9 seed Silver Creek (11-4-1 overall) at Gardner Field. Steamboat is 15-1 and seeded No. 8, and until a freak goal late in Wednesday’s 6-1 first-round win over Longmont, the defense had gone nearly 500 minutes without allowing a goal.

Some of that had to do with Steamboat’s prolific, ball-hogging offense, but the back four of Lupori, freshman Megan Salyer, sophomore Keelan Vargas and junior Maggie Henry — not to mention senior goalie Ocoee Wilson — make sure the few chances opposing offenses do get are short-lived.

“El Diablo, she is our center D. She cleans up all of our messes,” Henry said of Lupori. “We all have a good relationship with each other off the field, so that kind of manifests into a good defense. We can read each other really well, and we connect.”

Bohlmann said Lupori has always had a tenacious attitude on the field, but wasn’t fully able to unleash it until this spring. She missed most of her freshman and sophomore seasons due to injury and was never truly healthy as a junior. But, as a senior, Lupori has thrived for the Sailors this season, her ability to drive the team a key reason it’s 80 minutes away from the state quarterfinals.

“I guess I’m not a very hot-tempered person off the field, but on, I just get in a zone, and I guess it’s a little malicious,” Lupori said. “I’ve had to tone it down playing defense because I don’t want to get any fouls right in front of the goal. It’s like a fine line of playing aggressive, but also clean.”

Silver Creek is far from an offensive powerhouse, but, similar to Steamboat, it boasts a formidable defense, one that will force Lupori and the Sailors’ back four to play on point in Saturday’s game, as a single goal could go a long way in determining the victor. The winner moves on to the state quarters to face the winner of No. 1 seed Lewis-Palmer and No. 16 D’Evelyn.

“I feel confident, especially with Ocoee behind us, that we can hold them off,” Lupori said. “I know they are going to be a hard team, but I think if we just walk on the field knowing we have the game, then it will be ours.”

Be there dressed in RED: 10am Saturday at Gardner Field at Steamboat Springs High School
Share the Facebook Event: https://www.facebook.com/events/277817565886923/