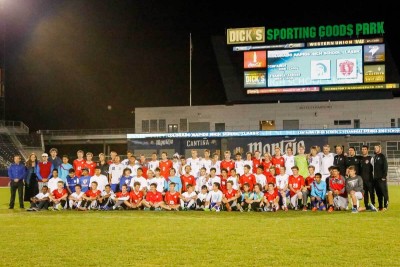 The Steamboat Springs High School boys’ soccer team could have spent a few more minutes playing inside Dick’s Sporting Goods Park in Denver, the home of the MLS’s Colorado Rapids, on Saturday against Centaurus, but, SSHS senior Charlie Beurskens decided it was time to go home.

“Obviously Charlie was very opportunistic with that shot as time was running out,” Sailor coach Rob Bohlmann said. “We were all kind of preparing and taking notes together for playing in overtime. And Charlie got it done. It was a super exciting way to finish.”

Beurskens scored on a bit of a prayer, a rainbow from near 30 yards out with only 25 seconds remaining in the second half to give Steamboat a 1-0 win. His goal was one of the few offensive bright spots in a game dominated by defense.

“Tonight, defensively, was a great effort,” Bohlmann said. “They find a way to get it done, even when they are not playing their best soccer. Their effort and their desire are amazing.”

The non-league win certainly won’t hurt the Sailors when it comes to regional seeding. The game had been talked about for a long time, primarily because of the venue. Not many high schoolers get a chance to play in a professional stadium, and Bohlmann said the experience met expectations.

“It lived up to everything we thought it was going to be, playing in that venue,” Bohlmann said. “From going into the locker room, to warming up and playing on the field, it was great. And then obviously, you can’t ask for a more exciting finish than that.”

Steamboat Springs moves to 12-2 overall with the win. Centaurus fell to 6-8.

The Sailors have only one game remaining in their regular season. They play at Battle Mountain on Thursday, with the winner claiming the Western Slope league title. The teams met once this season, with Battle Mountain winning 6-4 in Steamboat on Sept. 8.