Ben James is, by nature, a quiet kid.

He’s similar to many teenagers in that he sometimes mumbles when he talks, fixing his eyes to the ground, and he loves video games and television, fixing his butt to the couch.

Not much lights him up like his brother, Cruz Archuleta, however, and on a cold, drizzly Tuesday afternoon in Steamboat Springs when asked to summon that brother — step-brother, actually — Ben’s eyes focused, his voice cleared and looking up through a hooded jacket, he hollered through the gloom: “Cruz! Brother!”

In a moment, Cruz was there, side by side with Ben, one Steamboat Springs High School student who’s helped carry the Sailors’ soccer team on the field to a home Class 4A playoff date at 6 p.m. Wednesday against D’Evelyn, and another who’s helped inspire that run off the field in an entirely different way. 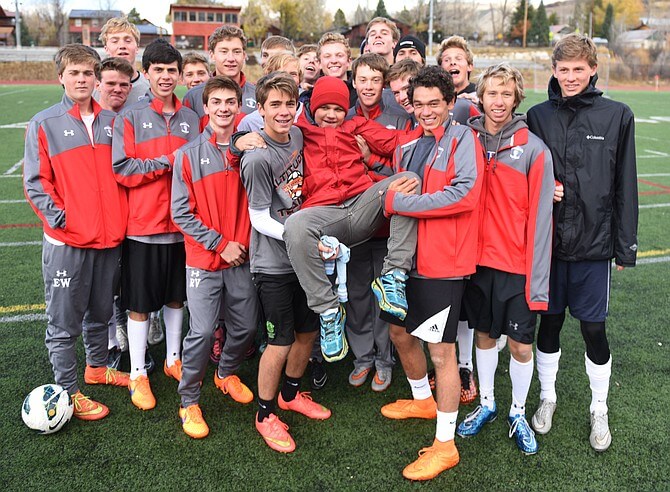 The role of manager was actually Cruz’s idea. Now a junior in high school, he served that role last spring for the Steamboat girls team and it struck him that Ben might be a natural.

Cruz and Ben have known each other since Ben’s father, Chad James, and Cruz’s mother, Sabrina James, first got together 10 years ago. They became brothers — step-brothers — eight years ago, when Chad and Sabrina married.

Nothing struck Cruz as “different” about Ben at their first meeting, and a decade later, Cruz still treats Ben like any other brother would a younger sibling — perhaps, with a bit less wrestling.

The idea of Ben, then entering his freshman year at Steamboat Springs High School, as manager floated between parents and coaches. It got an apprehensive nod from Chad and Sabrina and an enthusiastic one from soccer coaches Rob Bohlmann and Casey Barnett.

Ben agreed to give it a try.

“At first we were worried,” Chad said. “Anything that’s different than sitting on the couch and watching the iPad is challenging for him.

“It was a total Hail Mary for us, to see if it would work.”

At first, their fears that it might not seemed justified.

Even though he was with Cruz, Ben struggled in the season’s first practices. He initially seemed lost without his dad. Ben has plenty of friends, however, and they began to help.

Grant Fenton, president of local energy product company, PowerICE, learned of Ben taking on the role as manager and offered a season of PowerICE to the team so long as Ben was the one in charge of distributing it.

Bohlmann and Barnett worked to interact with Ben, and the team adopted him.

“Like any player, he had to establish a rhythm,” Bohlmann said.

He did. Now Ben shags balls on the sideline, helps organize the team’s equipment and bags, hands out PowerIce from a cooler at games and practices and, from a camping chair with a bright red umbrella, cheers loudly, especially for Cruz.

“He’s just blossomed,” Chad said. “He’s so much more active, and for us, it’s a gigantic win.”

Cruz has offered up plenty of reason to cheer this season. In 15 games, he’s racked up 17 goals, more than any two other players on the team. He’s a smooth-stepping attacker with quicks and a natural ability with the ball.

Ben doesn’t necessarily aspire to share the field with Cruz. One symptom of fragile X is low muscle tone and that, with the sensory overload of playing in a game, would make it more “miserable experience” for Ben than “dream come true.”

Instead, he’s been thrilled to share a sideline, and not only with Cruz, but with all the coaches and players who’ve taken him on as a brother and a teammate.

Ben comes to life when he’s hollering for Cruz and the Sailors, when he’s helping out at practice or tossing PowerICEs to his friends, his mumbles turning clear, his face shooting up and his eyes shining bright.

Thank you to our friends at the Steamboat Pilot and Today.
This Original Story by Joel Reichenberger can be found at SteamboatToday.com