Huskies slide by Steamboat girls soccer in the snow

STEAMBOAT SPRINGS — A cold rain that turned into steady second-half snowfall chased away all but the most dedicated fans Thursday at the home Steamboat Springs High School girls soccer game against rival Battle Mountain. 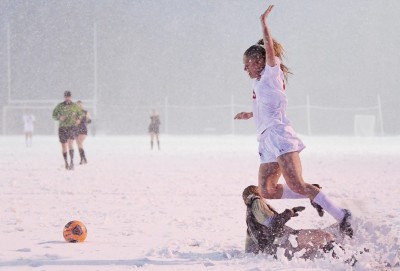 It was snowing hard enough that the conditions forced coaches, parents and other volunteers to sprint onto the field with shovels whenever the ball was at the other end of the field in a desperate effort to maintain the field’s lines.

When it was over, however, the Battle Mountain players weren’t quite ready to leave. The team, mostly wearing just shorts and long-sleeve jerseys, engaged in a fierce snowball fight.

They had something to celebrate after knocking the Sailors off, 2-0, avenging a loss to Steamboat from earlier in the season and further knotting the top of the Western Slope League.

“The league is very, very tight,” Battle Mountain coach Dave Cope said. “There are legitimately four really good teams. … We played really well the first time (against Steamboat) and we were just unlucky. Soccer’s like that sometimes. We didn’t come away from last time feeling like we had to make any major changes. We just wanted to keep playing the way we were playing.”

Steamboat had its opportunities in the second half after the weather turned and the field became blanked in snow. Battle Mountain had put away two first-half goals to take the lead, however, and that proved too much for the Sailors.

The Huskies got their first goal from Avery Weaver, who bombed a shot in from 35 yards, looping it high over Steamboat’s goalie for a 1-0 lead. Audrey Teague made it 2-0 several minutes later with another long shot, this one from about 25 yards.

The Sailors, on the other hand, struggled to get anything going in the first half.

“In the first half we lacked the connection. We had no connection whatsoever, and on the opposite end of that Battle Mountain had a good rhythm and created a couple good goal scoring opportunities,” Bohlmann said. “In the second half, it was different. We actually did very well getting out and knocking around.”

Steamboat moved the ball better in the second half, but thanks in part to that weather and in part to a stiff Huskies defense, scoring wasn’t going to be easy.

“Rob kept his team together today and they stayed in the game,” Cope said. “We were fortunate to score goals before the snow hit, to score our goals in the first half because it was going to be difficult in the second half for either team to score.”

With the win, Battle Mountain bumped to 8-2 in the league. Thanks to another result Thursday in the league — Palisade beat Glenwood Springs — those three teams are tied at the top, each with two losses.

Steamboat, meanwhile, is fourth at 4-3 in the league and 6-3 overall.

The loss was the second of the week for Steamboat after a 2-1 overtime loss at Palisade on Tuesday. The team will have a chance to get back on the right track Saturday with a trip to play at Rifle.