Huskies overcome Sailors, 3-1, in second half 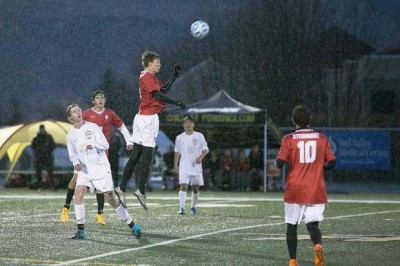 Battle Mountain soccer edged Steamboat Springs, 3-1, in Edwards while Eagle Valley defeated Summit County, 3-0, in Gypsum on a damp evening in both locales.

The Huskies were already in the postseason as 4A Slope champions, and the Devils earned the league’s second automatic bid with Thursday’s results. While Steamboat Springs needs to get a wild-card bid to the dance, at 12-3, the Sailors should be good to go as well when the bracket comes out on chsaa.org.

While, the result looked decisive, the Huskies only broke away from the Sailors late in the second half with goals by Donnie Leavitt and Uriel Lopez in the 66th and 67th minutes, respectively.

“This is a really good team we played tonight,” Huskies coach David Cope said of Steamboat. “They’ve gone down to the Front Range and proved it. They’ve proved it around our league. Tonight, it was anybody’s game.”

“The first half was pretty knotted up. Going into the second half, we felt we had to do was push the envelope more and get numbers forward,” Sailors coach Rob Bohlmann said. “We felt like we made that adjustment well. Obviously, when they found that second goal it was big and the third goal was a back-breaker. All in all, we felt confident coming into this, win, lose or draw, it was going to be important to play well going into next week.”

The Huskies had 12 seniors for Senior Night and that’s a problem when Cope is trying to start all of them in an 11-man lineup.

Regular starting keeper Jack Skidmore volunteered to be the odd senior out, which allowed Cope to put Leavitt at goalie. The good news for Battle Mountain on Thursday night was that Leavitt isn’t a newbie to the position, having been the starting keeper in 2013 with 15 wins to his credit.

That came in handy when Steamboat came roaring out of the box with two golden scoring opportunities. Leavitt parried the first over the bar, and smothered the second from a corner kick.

“Right away, they came at us.,” Leavitt said with a laugh. “They had two shots that needed big saves. It took me back to the first two years I was playing goalie. It was a little bit of a flashback there.”

As The Huskies got back to their normal setup, Leavitt was in a more familiar role, deftly heading the ball to split the Sailors defense. Oscar Lopez jumped on the feed and made it 1-0.

The Sailors responded with a sensational corner kick from Jack Salyer. He bent it from the flag past Skidmore for the equalizer in the 21st minute.

There is only one assist given in soccer and that’s too bad. The game-winner went down as Uriel Lopez to Leavitt, but it was the run by Battle Mountain’s Brandon Rodriguez that made it happen.

Rodriguez cut from the right side to the top of the box with a brilliant run. He sent it to Lopez for the shot. Steamboat goalie Andrew McCawley got the save, but had no chance when Leavitt pounced on the rebound.

“I can’t even remember it,” Leavitt said. “All I remember was the ball was in the back of the net and the whole team was in the huddle.”

Lopez struck again a minute later to ice the game.

Durango, Battle Mountain and Eagle Valley officially have the Western Slope region’s automatic spots. As a refresher, the Slope league, plus the 4A teams in the Southwest League make up the region. Last year, both Battle Mountain and Steamboat made the postseason as wild cards with identical 9-5-1 overall records.

With the Sailors at 12-3, Bohlmann isn’t overly concerned about the Sailors getting a postseason invite.

“We feel really optimistic,” Bohlmann said. “We’ve earned it. We really feel we have a good case. Our non-league record and how competitive our league was, we have a lot of factors to have a case.”

Meanwhile, the Huskies would like a seed in the top four. Cope, who could probably write a college thesis on playoff scenarios, thinks that The Classical Academy will be No. 1, followed by Cheyenne Mountain and then some combination of Longmont, Niwot, Battle Mountain and Evergreen.

“If you can find four other teams in the state with 13 wins overall and 10 wins in a row, then put them above us,” Cope said.

The bracket comes out on Sunday at chssa.org, and the first round is on Wednesday.