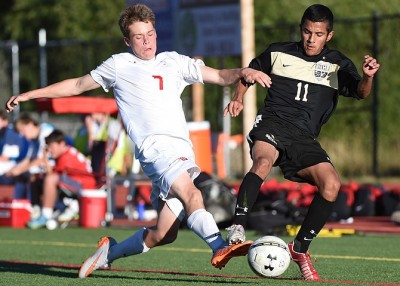 Battle Mountain’s dynamic first half outweighed Steamboat Springs’ dramatic turnaround Tuesday night as the Huskies won on the road to even things up in the Western Slope boys soccer league, 6-4.

Battle Mountain scored in the first minute of the game, then three more times before half, all those goals coming from different players, to take a 4-1 lead into halftime and despite playing markedly better in the second 40 minutes, the Sailors could never catch up.

“We were playing good, team soccer,” Battle Mountain junior Miles Joersz. “We were working the ball up and down the field, making overlapping runs and when we have the ball on their side of the field a lot, we’re getting the ball in the net.”

Junior Creek Kamby started the scoring less than a minute after the start of the game, and Battle Mountain built a 3-0 lead before Steamboat could respond, beating the Sailors up, down and all around the field.

It was no accident, no lucky shots. The Huskies were more aggressive and faster, better prepared and more alert.

“We had no heartbeat,” Steamboat coach Rob Bohlmann said. “That was as poor of soccer as we’ve seen in a long time.

Uriel Lopez and Donnie Leavitt both scored before Steamboat could answer, then Chase Keep added a goal before halftime.

“We really lacked organization in the midfield,” Bohlmann said. “Battle Mountain is very good on the flanks, but we felt there were opportunities in the center of the park. We weren’t able to find it and that’s an adjustment we have to make.”

Steamboat did its best in the second half to try to change that outcome.

The Sailors got on the board with a corner kick goal from Ross Stuart midway through the first half, then got a life-giving 35-yard strike from Jack Salyer 20 seconds into the second half.

Two goals is no small deficit, but Steamboat at least was starting to earn opportunities as the game wore on, something it couldn’t claim in the second.

Battle Mountain didn’t disappear, however, and for every step forward Steamboat took, the Huskies answered. Jesus Romero scored for Battle Mountain, and Kamby put in his second, a rebounded shot that proved to be a dagger.

Steamboat got a third goal when Cruz Archuleta put away a pass from Charlie Beurskens, then another, to set the final score when he tipped in a free kick from Beurskens with 19:31 remaining.

“The soccer improved a little,” Bohlmann said, “but the effort, the desire, the hunger, improved a lot.”

A pair of late, hard Steamboat shots threatened to make things even more exciting, but a huge save in the final 10 minutes from back-up goalie Alan Villegas helped the Huskies.

Original Story and Photo by Joel Reichenberger found in the Steamboat Today.

Watch the Whole Game from ESPN Sports on Radio.