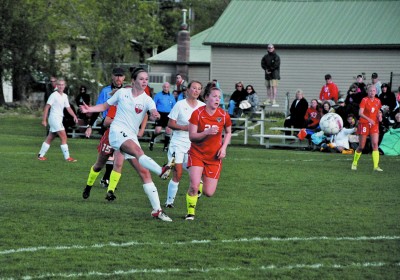 They got a goal early and a goal late, and it added up to one of the biggest wins in a decade for the Steamboat Springs High School girls soccer team.

The Sailors won their first playoff game since 2006, going on the road to defeat Montrose 2-0 Wednesday.

“We’re quite excited,” coach Rob Bohlmann said. “There’s not a better feeling in the world.”

Now, Steamboat has a chance at an even bigger prize. It plays Saturday on the road at rival Battle Mountain.

The win against Montrose was an upset, the No. 20 Sailors pulling it out against the No. 12 seed in the 32-team Class 4A state tournament.

It was made possible first by an early score. Maggie Henry won a ball and played it to Brooke Buchanan, who beat the goalie for a 1-0 lead inside of five minutes.

Later, Natalie Bohlmann made it 2-0 in stoppage time, putting back a rebound from a Mackenzie Gansmann shot.

In between, the Sailors got excellent play all around. Rob Bohlmann said Ocoee Wilson was stellar in goal, and the team’s defense was resolute — an accomplishment that underscored the entire effort.

The team played without defensive stopper Caroline Walters, left home too sick to even make the bus ride.

Early in the game, Steamboat opted to shift one of its leading scorers, Jordi Floyd, back to try to fill the hole, and Colleen Garreecht-Connelly came in to replace Floyd in the midfield.

It all worked perfectly.

“It showed the team’s ability, when one of us isn’t at 100 percent, to make changes,” Bohlmann said. “Players came in and stepped up big.”

“The girls played well, they defended well, and we had some good combinations and good possessions,” Bohlmann added. “It was a battle at both ends, but we feel it was a very solid result for us.”