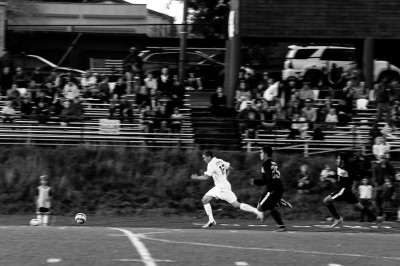 Battle Mountain is one of those opponents for the Sailors that is always circled on the calendar. The games are always exciting and never over until the last minute, or second. Tuesday night was no exception. The Sailors came out hot, and were able to get into the attaching zone more than 20 times in the first half. After a few close calls from Sam Rossman, Charlie Beurskens and Cruz Archuleta, the Sailors were able to scrap together a well deserved goal in the final 30 seconds of the first half, when Cruz Archuleta poked home a loose ball from within the six.

Battle Mountain was able to come back after the half time break. Battle Mountain’s Creek Kamby knotted the game at 1 after running through Steamboat Senior Goalkeeper Jake Andersen after a loose ball and was able to put it home. Andersen was carried off the field with a deep bone contusion to his femur and was unable to return to the game. Back up keeper, Sophmore, Andrew McCawley stepped in and held down the fort with 4 saves in the rest of the half.

Steamboat will be back in action Saturday at Home against Palisade High School. The Sailors now need to win out their last 3 games to be in the mix for the post season.