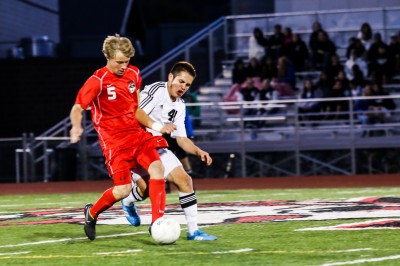 The Sailors seemed to have everything going for them in the first 30 minutes of Tuesday nights match up in Eagle Valley. Nathan DePuy started things off with a great goal off a slotted pass by Charlie Beurskens in the tenth minute. Not to be outdone, Charlie slammed home a magical goal of his own working off of a pass from Cruz Archuleta in the 15th minute. Then things all changed. A minute later, a loose ball in the box led to Steamboat Goalkeeper Andrew McCawley going after the loose ball but instead taking down an Eagle attacker. The call on the field was a PK that was converted on McCawley to his right. 3 minutes later Eagle tied it up with a great single effort by Aaron Ledezma to beat 2 Steamboat defenders and slot a ball home past McCawley.

From there the game became very chippy with very few first half calls from the Referees in blue. With lots of would be fouls going uncalled for both teams, both teams reached their boiling point at halftime coming together for words with one another and were quickly separated. The second half found the refs calling the game much more tightly with 22 fouls called in the second half compared to 6 total in the first half. With just 4 minutes left in the game, things boiled over. Aaron Ledezma dragged Steamboat’s Will Petersen to the ground near the sideline. When the players reached their feet, Petersen pushed Ledezma away, ended in the night for both Petersen and Ledezma with red cards, Ledzema for the foul and Petersen for retaliation. With both teams playing with 10 men, Steamboat pushed forward trying to put the game away in over time. Eagle Valley made some heroic saves from their back 4 to keep the game in hand and the ball out of the back of the net. Regular time ended in a tie at 2-2.

3 minutes into overtime, Eagle Valley received a foul call from around 25 yards out. With a well placed ball at the back post Eagle took one shot that was deflected by Steamboats Hector Lopez, but the rebound was slammed home. And with that, Eagle Valley took home the 3-2 victory.

The Sailors have one game left in their season, away at Moffat County on Thursday. The Sailors are on the outside looking in to the playoff, but with any luck and a few pieces falling their way, they may just see themselves in the playoffs come Sunday’s Draw.