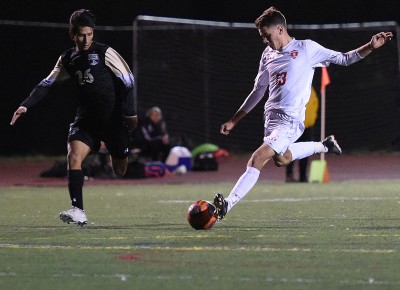 Steamboat’s Murphy Bohlmann swings through for a shot Thursday against Battle Mountain. He scored on the play, his second goal of the night and his 24th of the season. That goal set a new school record for boys goals in a single season.
Photo By
Joel Reichenberger

The funny thing in the photo taking, hug giving, shout ringing celebration of the Steamboat Springs High School soccer team’s biggest win in years, 4-1 at home Thursday against bitter rival Battle Mountain, was that, on paper, the game didn’t mean all that much.

The Huskies were already locked into first place in the Western Slope League and the Sailors into second. Both teams were already guaranteed a spot Sunday when the Class 4A state playoff bracket will be announced, and those spots didn’t change very dramatically based on Thursday’s result.

On paper, it was almost a meaningless game.

The Sailors snapped an 11-game losing streak against Battle Mountain that stretched through seven seasons, to 2011, and they did it in almost fairytale fashion.

Two of Steamboat’s first three goals came off the foot of junior Murphy Bohlmann, who first equaled, then surpassed the school’s all-time boys soccer scoring record that was set at 23 goals.

He’s now at 24 and counting, and he and the rest of the Sailors counted down the final seconds of Thursday’s game before mobbing onto the field to celebrate along with fans, friends, and family.

“This is one of the best feelings I’ve had as a Steamboat Sailor,” Bohlmann said.

Quinn Connell also scored twice Thursday, but it was Bohlmann that made history. Both goals came in the first half. The first he put away after taking a pass in traffic in the middle of the field. The second, he drilled home past a diving keeper after pulling a move that’s become plenty familiar to Sailors’ fans this season. He slipped behind the defense, took a long pass and, in a flash was one-on-one, staring down a chance to take a 3-0 lead and to take over the team’s scoring record.

The crowd at Gardner Field outside Steamboat Springs High School, swollen by senior night and homecoming week and even, somehow, youth soccer night, audibly gasped when Bohlmann took the ball alone, fielding a slick pass from Connell. It was nearly silent as he closed in only to explode when ball met net.

Bohlmann, who’s used his speed all season to get those breakaway opportunities, ran — no, sprinted — 70 yards to the other end of the field after his goals, his arms stretched wide and his teammates struggling to both congratulate and keep pace.

“It was such a tremendous group effort,” Steamboat coach Rob Bohlmann, Murphy’s father, said. “He’s there to put the cherry on top, and he put on a couple of cherries.”

It was Bohlmann’s eighth game this season with multiple goals and bumps him into a tie for fifth in the state in scoring. The goals pushed him past 2012 Steamboat graduate Mac Noel on the team scoring list.

“He’s a kid who never gives up and he turns no-chancers into half-chances into goals,” Battle Mountain coach Dave Cope said. “Tonight was a test for him, to see if he could do it against a good team. There are a lot of goals to be had in this league against the bottom half, but could he put goals away against a good team? If he did it tonight, he proved it. If he didn’t, he proved something else, and he proved it tonight.
“It was a fantastic showing by him,” Cope said, “and no better timing to do it than on homecoming against Battle Mountain.”
Connell used his head to add a pair of goals to the night, literally, tipping both in with his noggin. It was excellent play there and strong play up and down the field that gave the Sailors the lead.

“It started defensively,” Rob Bohlmann said. “We wanted to be tight, to make the field small. They’re so good with the ball, but we didn’t want to let them play with the ball. The end result was you win it, and then we start creating things, going to goal, and you have more and more confidence.”

Steamboat was up 4-0 midway through the second half when the Huskies scored their only goal of the game. Alan Villegas came up from goalkeeper to put away a penalty shot the Huskies were awarded for a Steamboat handball in the box in the 60th minute.

Battle Mountain didn’t shrink in the second half, pressuring Steamboat’s defense until the final moments, but there was no coming back this time against the Sailors.

“We ran into a really excited team and we got hit by a tsunami,” Cope said. “I just told our group it doesn’t say anything less about us over the course of 15 games. That’s the kind of team you see in the playoffs, a good, motivated, excited team.”

Steamboat heads into the playoffs having won its last two and six of its last seven. It secured that second-place finish and a spot in the playoffs Tuesday with a 1-0 win against Summit.

Thursday, it did something even more, even if it didn’t seem like it mattered much on paper.

“We got through Tuesday and there was a big lift, like we’ve qualified for playoffs. Now it was just about Battle Mountain,” Rob Bohlmann said. “The first game against Battle Mountain (a 2-0 loss) we played OK, but we didn’t have near the energy you need to go in and play against an opponent like that. Tonight, it was very good energy. They were brilliant. They were brilliant.”