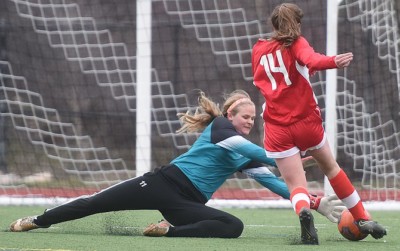 Steamboat goalie Leah Rowse dives just in time to save a goal Wednesday night as the Sailors played against Glenwood Springs. She got that one, but the Demons managed a 3-1 win. Photo by Joel Reichenberger.

Nearly halfway in, it’s been a “walk-before-you-can-run” kind of season for the Steamboat Springs High School girls soccer team.

Playing on the road Saturday at Eagle Valley, the Sailors struggled with the walking but back at home Wednesday against Glenwood Springs, the team better. It lost Saturday, 6-0, and Wednesday, 3-1, but coach Rob Bohlmann said his squad is picking up speed as it heads toward the back half of it schedule.

“Things were so much better today,” Bohlmann said.

Glenwood picked up two first-half goals — one early from Sarah Helm and the other, a quick put-back after a rebound off Steamboat keeper Leah Rowse from Natalia Taylor.

Steamboat got an answer early in the first half when Delaney Moon swept up a Glenwood goal kick and put it back into the net. The Demons snuffed any comeback opportunity, however, when Devin McSwain put away a penalty kick late in the second half.

Steamboat wasn’t ever quite poised for that comeback. It got some good defense, including a gutsy dive from Rowse in the second half where she took a scoring opportunity right off the foot of a Glenwood attacker.

But, the Sailors never could turn a good opportunity into a good shot. Passes down the field always seemed just out of reach of a foot that would have been able to put them away.

“It’s really something that’s been a big focus of ours, those angle passes to beat the final line and the runs we need to make to get behind that line, and ultimately the timing,” Bohlmann said. “Our runs were decent. The passes just were a little too vertical.”

Still, Bohlmann said the effort was an improvement, both from Steamboat’s season-opening 2-1 loss at Glenwood and from that 6-0 loss Saturday at Eagle Valley.

The Sailors, 3-4, aren’t quite pushing it from walk to run yet, but he said they’re picking up the pace.

“Things were so much better today. Saturday was one of those games where the opponent and life kick you in the britches, but today, we came out and the soccer was much better,” Bohlmann said. “The communication was better, the organization, the heartbeat you have to have before you can get into the details. We responded from a very difficult day Saturday.”