Just as it did in their season opener against Rifle, the Steamboat Springs High School soccer team relinquished an early goal.

Once breaking free, Bernal cross passed the ball to senior German Alvarado, who was already behind his defender.

Sailors sophomore goalie Axel Kovach backpedaled, trying to anticipate the strike, but Alvarado easily put it away out of Kovach’s reach.

The goal was the only one of the evening as Glenwood Springs won 1-0 over Steamboat on Thursday, Sept. 5, at Gardner Field.

“Their goal, the lone goal tonight, was very similar to the first goal on Saturday,” Steamboat Springs head coach Rob Bohlmann said. “It’s those transitional moments. We’re really trying to recognize the cues, when the other team’s a threat and we need to drop back, and when they’re not a threat and we can hold our line. It was one time and they capitalized. From there on, I think we defended quite well.” 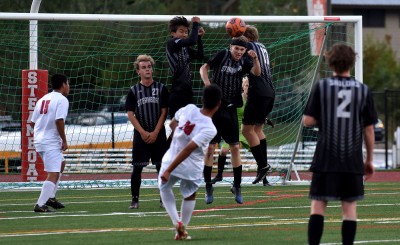 Steamboat Springs keeps a free kick out of the goal in a game against Glenwood Springs on Gardner Field on Thursday, Sept. 5.
Photo By Shelby Reardon

The Demons nearly doubled their lead with a free kick at the 23-minute mark.

The ball snuck over the Sailors’ wall, soaring towards the goal. Kovach reacted, lunging and deflecting it off the tips of his fingers and ringing the ball off the crossbar. The rebound could have been dangerous, but the Steamboat defenders had Kovach’s back, clearing the ball.

“I was struggling to see the ball from the wall blocking my visibility for the most part,” Kovach said. “Then once I could see it over their heads, I took a step and went for it.”

The Sailors had trouble generating offense in the opening half, but as they did in the season opener, they woke up in the second.

With the best chance all game, senior forward Oliver Caparrelli found himself alone in the near corner seven minutes into the frame. He lifted the ball, flinging it sideways along the 6-yard line. Guardado’s gloves missed it, giving sophomore Joseph Scoppa a chance. He used his body to push the ball towards the net, but it banged off the post.

“The one opportunity that we had, we’ll watch that 10 times over,” Bohlmann said. “That was textbook. It was a good switch of the field. We had good numbers in. Those are the types of things we’ll build off of.”

The Sailors (0-2) defenders did everything they could to help on the attack. First, they would stop the Demons from advancing, then they’d work the ball up the field, usually with the skilled toes of Kaster. Moving straight up the middle, he stepped forward over the ball with a man on him. He turned his back to the challenger and spun the ball past him, generating cheers from the crowd. As soon as Kaster passed to the front line, though, Glenwood (2-0-1) stripped the ball away and cleared it.

“Steamboat was trying to get numbers up, trying to press us pretty hard. We kept our composure,” Glenwood Springs head coach Wayne Smith said. “There were a couple of minutes where they were kind of coming at us where we lost our shape for a little bit. Then we were able to get back into it.”

The Demons defense was relentless. No matter what the Sailors tried, a Glenwood player was there. In one-on-one battles, their feet were quicker. When it came to stopping a player in motion, their ankles were stiffer.

“We didn’t really feel threatened too much,” Smith said.