GLENWOOD SPRINGS — The Steamboat Springs Sailor scored first Thursday night, but unfortunately, the team did not score the most as top-ranked Glenwood Springs showed the Sailors why the team is the highest ranked Western Slope team in the rating percentage index standings headed into the playoffs. 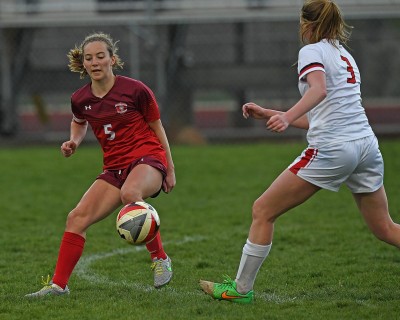 Steamboat Springs senior Keelan Vargas, who was injured in the first game of the season, got back on the field Thursday in Glenwood Springs. The Sailors lost the game. 4-1.
Photo by John F Russell

Glenwood dominated possession in the first half, but Steamboat cashed in on one of five first-half shots. Kelly Petix fired a hard shot on goal that was blocked by the keeper, but Steamboat’s Izzy Rillos got a foot on the rebound, which deflected off another player in front of the net and went straight up into the air. A Glenwood defender attempted to clear the ball back over her head, but the official on the sideline ruled the ball had already crossed the line giving the visiting Sailors a 1-0 lead.

But the Sailors could not find an answer for Glenwood senior Devon McSwain who had a goal and an assist in the first half. The first goal tied the game at 1-1 at the 17-minute mark, and then Steamboat was called for a penalty along the sideline. McSwain’s free-kick found the head of teammate Tatum Lilly for what turned out to be the game-winning score.

The Demons had another free kick a few minutes later after a Glenwood player was taken down by a slide tackle. But Steamboat goalkeeper Caroline Lupori came up with a great save to keep the score 2-1 at the half.

“The ask was we go out and fight and battle, there was nothing that was dangerous,” said coach Rob Bohlmann. “Sometimes, you are going to draw penalties.”

Unfortunately, in this game, it hurt the Sailors, as two of the Demons four goals were scored on set plays.

Steamboat gave up the third goal of the game midway through the second half after another Steamboat penalty. McSwain powered the ball 35-plus yards through the air into the upper part of the goal to make the score 3-1. Then in the final 10 minutes, Glenwood’s Tatum Lilly connected with Natalya Taylor one last time and made the final score 4-1.

Steamboat will return home Saturday for the final regular-season game against Centaurus. The varsity game is slated to begin at 5 p.m. at Gardner Field.

“We feel very accomplished in many ways,” Bohlmann said. “We defended a really good team. In the run of the game, I feel like we defended well.”