SteamboatToday.com – Steamboat Springs High School’s MacKenzie Gansmann started it, and then, she finished it.

The senior on the Sailors’ girls soccer team scored twice — once early, once late — to lead Steamboat to a 2-1 win Friday against Palisade at Colorado Mesa University in Grand Junction. 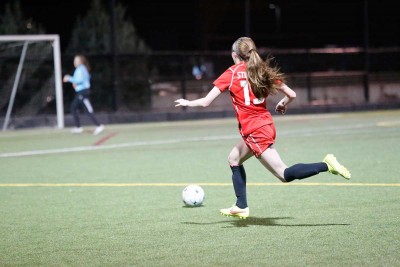 Kenzie Gansmann Takes off down the sideline.
Photo By Casey Barnett

“She was dangerous all night, creating things on the left flank. We were able to find her early on and get the opening goal,” SSHS coach Rob Bohlmann said. “It was a battle between two quality teams. All the players on both sides, really … it was a great display of competitive soccer.”

Gansmann scored her first only 90 seconds into the match on a Jordi Floyd assist; it was the first goal Palisade (3-1) had allowed this season. The Bulldogs answered by scoring in the 19th minute, the only goal Steamboat has allowed through three games this season.

The teams went to the break tied with a goal each.

“A key component to our game was we really lost our ability to possess the ball in the last 20 minutes of the first half,” Bohlmann said. “So that was really the focus at halftime.”

The Sailors found their rhythm again in the second half but didn’t score the game-winner until Natalie Bohlmann found Gansmann for a goal with about three minutes to play.