SteamboatToday.com – Senior MacKenzie Gansmann and junior Brooke Buchanan like to pretend they can communicate telepathically. Friday, against Middle Park, the duo made it look very real in an impressive, season-opening win for the Steamboat Springs High School girls’ soccer team.

“We always kind of have this joke where we try to have this mental connection on the field,” Gansmann said. “She was definitely in the right spot at the right time.” 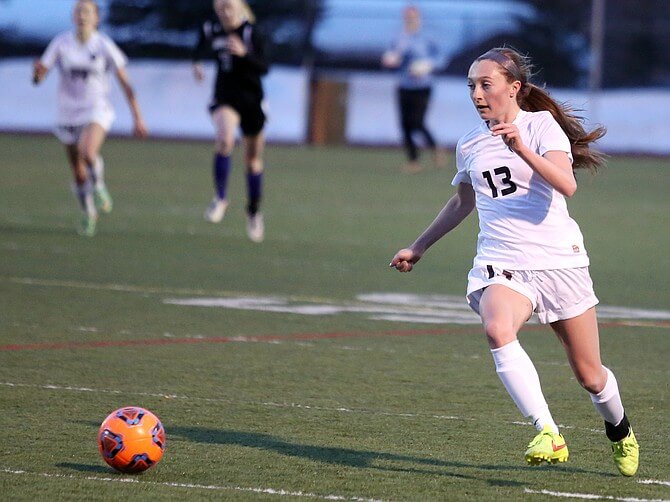 While their psychic abilities might be nothing more than a jest, their dominance on the field was nothing to laugh at. Buchanan scored three goals, while Gansmann added one and two assists in the Sailors’ 9-0 win against the Panthers at Gardner Field.

Gansmann’s early assists were especially important in getting the Sailors started.

“That’s the way Kenzie plays. And she does such a fantastic job, tactically dialing in,” SSHS coach Rob Bohlmann said. “She makes those runs that are timely and explosive. Once Kenzie is in and behind, she does a nice job of making decisions.”

Middle Park (0-1), which went 12-3 last season and made the Class 3A state tournament, looked outmatched from the start. Buchanan scored the first goal of the season for Steamboat on an assist from freshman Megan Salyer in the sixth minute.

Freshman Delaney Moon made it 2-0 a few minutes later on an assistant from Gansmann. In the 14th minute, Gansmann’s great hustle allowed her to find the trailing Buchanan for an easy goal and a 3-0 lead.

“That’s awesome they can come out and have confidence,” Gansmann said of the underclassmen’s performance. “I’ve been a freshman before, and it’s definitely scary, playing with the older kids. I think it’s awesome they can play their game and not be afraid.”

Steamboat led 4-0 at halftime after a goal by junior Maggie Henry in the 20th minute.

Senior Natalie Bohlmann scored the fifth goal only six minutes into the second half, with Buchanan getting her hat trick five minutes later. Gansmann scored her lone goal midway through the second half, an impressive solo display that showed she is capable of much more than a good assist.

Sophomore Kelly Petix finished the game out with a pair of goals, matching her season total from her entire freshman year.

“It wasn’t forceful; it was fluid. It was good, attacking soccer,” Rob Bohlmann said. “It’s certainly a great way to start. Everyone was engaged. Everybody was creating opportunities for each other.”

Next, the Sailors host Summit at 6 p.m. Tuesday. The Tigers (0-1) lost 4-2 against Battle Mountain in their season opener Thursday. Summit plays Palisade on Saturday before coming to Steamboat.